Switches rescued from floods for Linux.conf.au 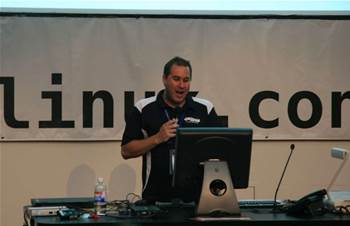 Annual Linux conference Linux.conf.au has kicked off at a quickly-located alternative venue in Brisbane, but only after a bout of last-minute organisation which included having to rescue networking equipment from a flooded retailer.

LCA 2011 had been due to take place at the Queensland University of Technology Gardens Point campus, but that riverfront location became unavailable following the flooding of Brisbane two weeks ago.

"I've got some lovely photos of our old venue with sandbags against the flood zones. It's a shame the sandbags were about three metres lower than the water," said conference organiser Dr Shaun Nykvist [pictured].

Organisers relocated the event to QUT's Kelvin Grove campus, but faced a challenge in acquiring the networking equipment needed for the event. The original set of Cisco switches ordered to provide connectivity became stuck on a ship which was rerouted from Brisbane to Sydney when Queensland's flooding woes began.

The conference committee then arranged to purchase replacement units from a Umart store in Brisbane. However, the store's warehouse itself flooded entirely before the purchase had been made, with some sections going entirely underwater.

Conference volunteers offered to help out in cleaning the warehouse, and discovered that some of the switches were in boxes that, while water damaged, had not been entirely soaked.

They removed the units and replaced the power supplies, but still paid Umart full price for the gear.

The equipment is being used for distribution at the main site, and for all the networking requirements at the official conference accommodation.

The committee is now examining plans to stage a hardware sale of other stock from the uninsured store as part of the conference community day this Saturday.

"Business is going to be crucial to getting the economy back to normal, so we want to show our support," Nykvist told iTnews.

John Ferlito, Linux Australia president, praised the Brisbane team for their last-minute relocation efforts. "The general consensus [from previous LCA organisers] was we would have just crawled into a corner and cried."