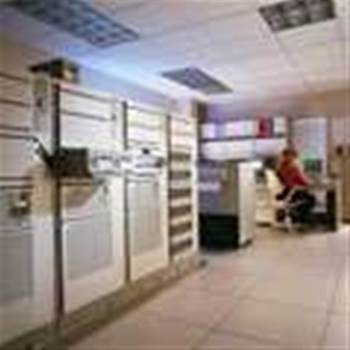 Unclear whether new chip will emerge from shadow of upcoming Rock.

Sun Microsystems and Fujitsu are scheduled to launch a jointly developed server processor later today along with a set of accompanying high-end servers.

The new chip is referred to as the Sparc64 VI and replaces Sun's Sparc4+ and Fujitsu's Sparc64 V processors. The two companies started working on the new chip in June 2004 under the Advanced Product Line codename.

The new processor features two cores, and quad-core upgrades are planned for the future. Chips running at 2.15GHz come with 5MB of L2 cache and the 2.28GHz to 2.4GHz models offer 6MB of L2 cache.

The companies plan to release benchmarks for specific workloads at a launch event in New York later today.

In a briefing last week, the two companies would only say that the new chips on average perform 50 percent better than their predecessors.

Sun, Fujitsu and Fujitsu Siemens will start selling systems that are essentially identical, including their product names.

The M8000 and M9000 are cabinet sized servers with 16 to 64 processors at prices ranging from US$200,000 to several million dollars. The servers support Solaris 10 and there are no plans to add support for additional operating systems at this stage.

"These systems are designed to solve the world's most complex computing problems where reliable and heavy lifting computing is needed. It is mainframe heritage reliability at open system prices," said Bob McGaughey, director of enterprise servers at Sun's Systems Marketing Group.

The chip was originally slated for release in 2006, but was delayed because more time was needed to design the actual servers.

The delay in the launch puts the server close to the release of Sun's upcoming Rock processor. Due out in 2008, the chip is expected to outshine the Sparc64 VI and will target the same back-end systems.

"These [Sparc64 IV] systems were conceived as an insurance policy at some level," argued Gordon Haff, a principal IT advisor at analyst firm Illuminata.

"Sun's strategic direction in back-end systems is their own CPUs like Rock, which appears to be on schedule. It remains to be seen how aggressively Sun is going to push these systems."

Systems in this market segment typically run a select set of applications that are considered mission critical. Essentially, companies try not to touch these systems once they are up and running, unless they have to.

Because this makes the market more resistant to the latest trends in the IT market, it will ensure that customers in the market for a new high-end Sparc server are likely to purchase the M-series.

But it also discourages a large group of customers from buying the new systems because they are currently running older versions of Solaris, argued Haff. The M-series only supports Solaris 10.

The M-series also supports multiple forms of virtualisation that could rekindle interest in the older art of isolated domains, also known as physical partitioning. The high-end systems support up to 24 physical partitions.

Although it is more secure and stable than operating system level virtualisation that is used by the VMWare and Xen technologies, it also consumes more resources.

VMWare and Xen virtual machines share all hardware resources, allowing one unstable system to bring down all virtual compartments.

Physical partitioning ties a virtual system directly to one or more CPUs, allowing each system to run completely isolated from the rest.

The technology is widely adopted in high-end Unix systems today, but has lost some appeal because of processor performance gains.

Haff suggested that companies could achieve better performance if they combine a few isolated domains in combination with the container technology built into Solaris.

Containers are often used to run multiple copies of a single application, such as web servers, on a single system.

Got a news tip for our journalists? Share it with us anonymously here.
Copyright ©v3.co.uk
Tags:
andfujitsuhardwarekillermainframesununveil