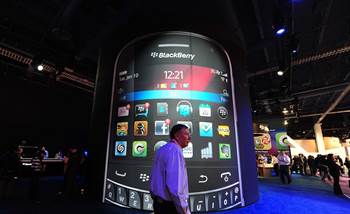 Struggling smartphone maker BlackBerry is mulling options that could include joint ventures, partnerships or an outright sale, as the company's leading shareholder steps down from its board in a possible prelude to taking a different role.

BlackBerry, which pioneered on-your-hip email with its first smartphones and email pagers, said on Monday it had set up a committee to review its options, sparking debate over whether Canada's one-time crown jewel is more valuable as a whole or snapped up piece by piece by competitors or private investors.

The company said Prem Watsa, whose Fairfax Financial Holdings  is BlackBerry's biggest shareholder, was leaving the board to avoid a possible conflict of interest as BlackBerry determines its next steps.

The resignation of Watsa, often described as Canada's version of Warren Buffett, suggests Fairfax may be part of a solution.

BlackBerry, once a stock market darling, has bled market share to the likes of Apple and phones using Google's Android operating system, and its new BlackBerry 10 smartphones have failed to gain traction with consumers.

Blackberry shares rose 7.5 percent to US$10.80 in New York and C$10.84 in Toronto in afternoon trading. But the shares remain well below the levels seen in June, before the company reported dismal results that included poor sales of the BlackBerry 10 phones it viewed as key to a successful turnaround.

A clean balance sheet makes the smartphone seller an enticing takeover candidate. Like Dell, it is a tech icon in need of a turnaround. But BlackBerry's cash flow is worse, meaning leverage would be extra risky.

But the smartphones that bear its name have little or no value, and it may cost US$2 billion to shutter that unit, the analysts said.

Analysts expressed skepticism about the new committee, noting that BlackBerry announced similar steps more than a year ago when it hired JPMorgan and RBC as financial advisers. A source said both are still involved in the strategic review.

"While a change in structure could result in a higher stock price in the near term, we do not envision any changes that would help BlackBerry reverse the significant smartphone share loss or rapid decline in service revenues," said Tim Long, analyst at BMO Capital Markets.

Watsa said Fairfax has "no current intention" to sell its BlackBerry shares. But if he remained on the board of directors, he would have a conflict of interest if he wanted to be part of a play for BlackBerry.

"I continue to be a strong supporter of the company, the board and management as they move forward during this process," he said in a statement.

BlackBerry's fate is likely to prompt questions from the Canadian government, which vets foreign takeovers of Canadian firms. The government said it would not comment on speculation about the company, but a spokesman for Industry Minister James Moore said the government wished BlackBerry well.

A source familiar with the situation told Reuters that the board decided to form the special committee last week. It was not clear if that decision was made before or after Reuters reported that BlackBerry was warming to the idea of going private to give itself breathing room to recover.

One source said BlackBerry has been talking to private equity firm Silver Lake Partners about potential collaboration in enterprise computing.

"If private equity can buy Dell, they can buy anything," the executive said, referring to efforts by Silver Lake and Dell founder Michael Dell to buy the computer maker.

Deep-pocketed Canadian pension funds, with their long investment horizons, are among those with the money and domestic credentials to take a run at BlackBerry.

Legal experts say any deal taking BlackBerry private would work best if it had Canadian involvement, given Ottawa's reviews of big takeovers for competitive and national security reasons.

"There is little question that the federal government would prefer a made-in-Canada approach," said Subrata Bhattacharjee, co-chair of the national trade and competition group at the Heenan Blaikie law firm in Toronto.

"A foreign strategic investor would certainly have to consider some very significant regulatory issues, including domestic and foreign antitrust concerns ... Some foreign investors might also have to address national security concerns," Bhattacharjee said.

Dattels is a senior partner at private equity firm TPG Capital and a former top investment banker at Goldman Sachs. His appointment to BlackBerry's board in June last year sparked a flurry of speculation that the company might consider a leveraged buyout or going private.

BlackBerry's new line of devices hit store shelves this year just as the high-end smartphone segment was showing signs of saturation in markets like the United States. Samsung Electronics recently reported results that fell shy of expectations, while Apple earlier this year reported its first quarterly profit decline in more than a decade.

On the mid- to low end of the market, competition is growing intense, with Chinese manufacturers such as Huawei Technologies and ZTE gaining ground.