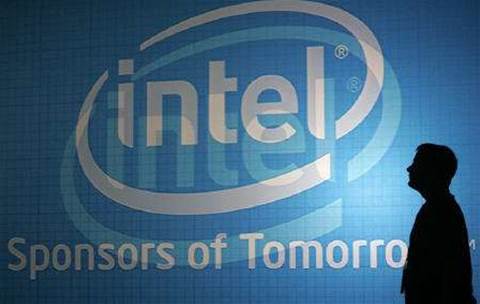 Shares in the world's largest chipmaker, whose net profit surged 48 percent year on year, gained 2.4 percent, driven by hopes for strong sales of its Sandy Bridge microprocessors, its newest and most advanced line.

"The expectation was there might be a miss. There is a lot of concern over smartphones and tablets, but that will take a backseat in the meantime," said Mahesh Sanganeria, an analyst at RBC Capital Markets.

Despite an apparent early success with Sandy Bridge, Intel faces sluggish personal computer sales and a major challenge from the exploding popularity of mobile devices, a market dominated by Britain's ARM Holdings.

Intel's processors are the brains in 80 percent of the world's PCs but the company has yet to make its mark in mobile gadgets that people increasingly depend on to surf the Web and update their social networking profiles.

"Right now there's just a larger overhang over the stock when it comes to tablets and smartphones. That may be an area where investors are more cautious," said Patrick Wang, an analyst at Wedbush Securities.

But for the shorter term, many investors are betting on a bump in revenue growth from the chip giant's newest product line, considered one of the most important advances in computer processing power. Intel unveiled its Sandy Bridge microchip last week.

"It seems to be getting widespread acceptance from the customers. Even with the consumer market being a little bit weak we expect it to ramp sales nicely in Q1," Chief Financial Officer Stacy Smith told Reuters.

Shares of Applied Materials, KLA Tencor, Novellus and other producers of chipmaking equipment rallied between 4 and 6 percent after Intel executives said they were almost doubling capital spending in 2011 to US$9 billion, plus or minus US$300 million.

Intel stock rose 2.4 percent in after-hours trading, after closing down 0.06 percent at US$21.81 on Nasdaq.

Intel posted an 8 percent increase in fourth-quarter revenue and forecast revenue of US$11.1 billion to US$11.9 billion in the first three months of 2011.

The fourth-quarter revenue slightly exceeded the US$11.37 billion expected by analysts, according to Thomson Reuters I/B/E/S. Analysts, on average, had expected revenue of US$10.73 billion in the first three months of 2011.

Intel had a record gross margin of 67.5 percent in the fourth quarter, compared to 66.7 percent expected by analysts.

Intel said net income totaled US$3.4 billion, or 59 cents a share, in the fourth quarter, compared with 53 cents per share expected by analysts.

Major technology companies are expected to keep up sales and profit growth in 2011, but economic troubles in the United States and Europe could temper their results.

Intel, however, also faces the unique challenges of safeguarding its 80-percent-plus market share in an evolving environment where consumers are choosing mobility and connectivity over processing power.

Apple's iPad and other tablets, powered by ARM-based architectures, consume less power and their longer battery life is winning over users. Some analysts foresee the imminent end of the PC era.

Intel's stock has hardly moved in the past year. The Philadelphia Semiconductor Index has surged around 43 percent since the start of September but Intel's shares gained only about 20 percent in that time.

"But the numbers aren't really what matters here. What matters and will overshadow the numbers is the challenges they have in terms of the end markets and what happens with PCs and handsets, and Windows getting ported to ARM and all those challenges which put them in a tough spot," said Jefferies & Co analyst Adam Benjamin.

"The numbers today are not what the business is going to look like in a year from now, (or) two years from now."