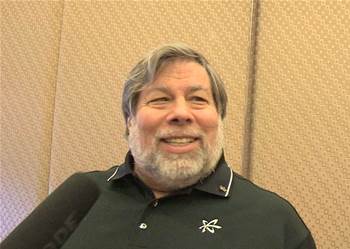 Apple co-founder Steve Wozniak predicts that storage array and spinning disk vendors will soon face a RIM-like decline due to the rise of server-attached flash drives.

Wozniak, visiting Australia in his role as chief scientist for enterprise storage vendor Fusion IO, told a gathering of Australian media today that mechanical storage was no longer fast enough for use as primary storage.

Fusion IO sells NAND flash devices that - when plugged into industry standard servers and programmed to act as a memory device - offer a higher performance alternative to disk-based SAN storage. Fusion IO’s solutions are used by data centre giants Facebook and Apple, and it counts Woolworths and Westpac among its high profile Australian customers.

Wozniak told media today he was a fan of “simplicity and speed” when developing or using applications, and that he considered Fusion IO’s approach to be a disruptive force in data centres.

A disruptive technology, he said, is defined as one that replaces large companies or entire industries.

“New disruptive technologies don’t have an instant disruptive effect,” he told iTnews (see video interview above). “Sometimes, like with RIM, it takes a few years before all of a sudden they are almost off a cliff. RIM wasn’t really affected at first by the iPhone, but a few years later it caught up. Eventually it catches up to you.

“The hard disk manufacturers haven’t been hit that hard yet, but you might just start to see their stock prices go down and down and down.”

Storage vendors have been trotting out incremental changes to their systems for many years, he said, but had not kept up with the speed of innovation in the processor or consumer device world.

Many storage vendors are now choosing to OEM Fusion IO’s technology – IBM, HP, Dell and Cisco among them. NetApp has also signed on as a partner.

“The performance of processors in the data centre has grown exponentially, but storage and memory as ways to deliver data have not,” he said.

Flynn cited the local example of Woolworths, which has been running analytics programs against its sales data during weekends for its Monday morning executive meetings. The processing of the data took 17 hours when coming off a SAN, he noted.

“The problem was they could not incorporate the weekend in that sales data. The reports only included what was purchased on weekdays,” he said. “With IO memory installed in Woolworths’ analytics system, it took the processing time from 17 hours to three hours, so the same job could be run in the wee hours of Monday morning for the full week of sales data.”

SSD technology is today far more expensive than spinning disk. But Flynn told journalists that he was confident prices would drop – and supply remain steady – thanks to the market momentum of consumer electronics devices that rely on the same technology.

Fusion IO customers either place the NAND disk directly in a server (via OEM partners), on multiple servers in the case of a virtualised farm or in servers that act as shared storage. Some implementations require enterprise developers to re-engineer their applications to suit this architecture.

Wozniak, despite having no input into Fusion IO’s strategy, has been hired by the firm to entice these software developers to do so using Fusion IO’s Software Development Kit. He told iTnews he felt it was worth the effort.

“There are plenty of companies out there making incremental changes to technology, and there are those seeking a new and better path. These guys – like Apple - are implementing a new technology in a way I believe in.”