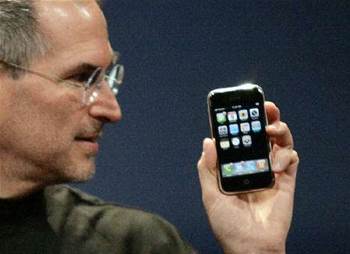 Steve Jobs, the father of the iPod, was on Tuesday crowned the undisputed king of the online music revolution by US music magazine Blender, topping a list of the 25 most influential people in Web music.

The magazine's "Powergeek 25" list was compiled to show the behind-scenes-players reshaping the way people listen to, buy and watch music.

"Music fans spend much of their day, if not their life, sitting in front of their computer, discovering and downloading music," Blender's editor-in-chief Craig Marks said in a statement.

"Today's power brokers no longer work in the steel-and-glass towers of the traditional record business; instead, they're tech geeks, bedroom bloggers and Silicon Valley visionaries."

He said Jobs, who co-founded Apple Inc. and is chief executive of the company, had proved to be a technology trendsetter.

"The iTunes Store and the iPod have done more to change the way people listen to music than anything since the CD, and maybe since the sound recording," Marks said.

The magazine put Tom Anderson and Chris DeWolfe, co-founders of the the popular social networking site MySpace as second in "The Powergeek 25."

They were credited with making made good on the Internet's promise to "level the music-industry playing field, allowing basement bands to effortlessly share their music, inform fans about tour dates and build an audience online".

In third place were the creators of YouTube, Chad Hurley and Steve Chen, whose file-sharing site has become "the star-maker MTV used to be".

At No. 4 was 68-year-old Universal Music Group chairman/CEO Doug Morris, whom the industry sees as a main influencer of digital music policy moves, including royalties and licensing.

Ryan Schreiber, who set up the Web magazine Pitchfork, was named fifth with his online music publication having "the power to create instant audiences for tiny bands like Art Brut and the Go! Team before they even release albums".

Following is the rest of the top 10: