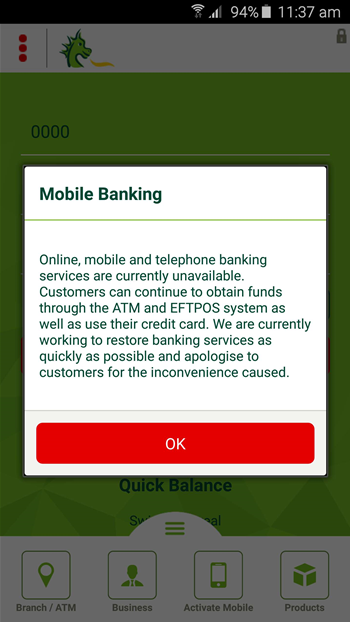 Westpac-owned subsidiaries St George, BankSA and Bank of Melbourne spent half the long weekend fielding complaints from customers after a routine systems upgrade downed online, phone and mobile banking services for a day and a half.

The three banks later advised customers online, phone and mobile banking would be offline from 11:30pm Sunday to 5am Monday as they performed systems upgrades to address the problem.

But the online and mobile banking platforms continued to be unavailable through Monday. EFTPOS and ATM networks were not affected.

The problems reportedly arose when data on the IBM mainframe hosting transactional data for the three banks became corrupt after scheduled maintenance, according to the SMH.

The IT team spent the next day trying to work out how to restore the database without losing any transactions, the paper reported.

Late on Monday a St George spokesperson said the systems issues were being rectified and service should progressively be restored throughout the night.

"Customer transactions that have been undertaken over the weekend should be processed overnight or tomorrow," the spokesperson said.

Bank branches were closed in NSW, Queensland, the ACT and South Australia for the Labour Day holiday, compounding the problem.

St George said it was sorry for the inconvenience the lengthy systems issues had caused.

The bank said it would reimburse any fees or charges incurred by customers as a result of the outage.