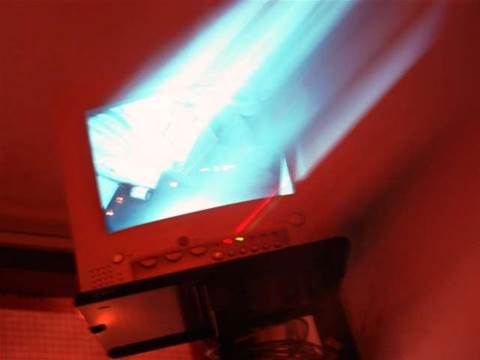 Physicists at the University of Michigan have demonstrated how two separate atoms can communicate with a sort of 'quantum intuition' which Albert Einstein referred to as "spooky".

In doing so, the researchers have made an advance towards super-fast quantum computing and even a quantum internet.

The scientists used light to establish an "entanglement" between two atoms, which were trapped one metre apart in separate enclosures.

"This link between remote atoms could be the fundamental piece of a radically new quantum computer architecture," said Professor Christopher Monroe, the principal investigator on the project who is now at the University of Maryland.

"Now that the technique has been demonstrated, it should be possible to scale it up to networks of many interconnected components that will eventually be necessary for quantum information processing."

David Moehring, the lead author of the paper who performed the research as a University of Michigan graduate student, explained that the most important aspect of the experiment is the distance between the two atoms.

"The separation of the quantum bits [qubits] in our entangled state is the most important feature," he said.

"Localised entanglement has been performed in ion trap qubits in the past, but to build a scalable quantum computer network (or a quantum internet) the creation of entanglement schemes between remotely entangled qubit memories is necessary."

The researchers used two atoms to function as qubits storing a piece of information in their electron configuration. They then excited each atom, inducing electrons to fall into a lower energy state and emit one photon, or one particle of light, in the process.

The atoms, which were actually ions of the rare-earth element ytterbium, are capable of emitting two different types of photons of different wavelengths.

The type of photon released by each atom indicates the particular state of the atom. Because of this, each photon was entangled with its atom.

By manipulating the photons emitted from each of the two atoms and guiding them to interact along a fibre-optic thread, the researchers were able to detect the resulting photon clicks and entangle the atoms.

Professor Monroe explained that the fibre-optic thread was necessary to establish entanglement of the atoms. But the fibre could be severed and the two atoms would remain entangled, even if one were "carefully taken to Jupiter".

Each qubit's information is like a single bit of information in a conventional computer, which is represented as a 0 or a 1. However, at the quantum scale, a qubit can be either a 0, a 1, or both at the same time.

Scientists call this phenomenon 'superposition'. It is not possible directly to observe superposition, because the act of measuring the qubit affects it and forces it to become either a 0 or a 1.

Entangled particles can default to the same position once measured, for example always ending in 0,0 or 1,1.

"When entangled objects are measured they always result in some sort of correlation, like always getting two coins to come up the same even though they may be very far apart," Professor Monroe said.

"Einstein called this 'spooky action-at-a-distance', and it was the basis for his non-belief in quantum mechanics. But entanglement exists and, although very difficult to control, is actually the basis for quantum computers."

Quantum computers could transmit provably secure encrypted data, for example, and could factor numbers much faster than today's machines.

This would make most current encryption technology obsolete, as most encryption today is based on the inability of man or machine to factor large numbers efficiently.

A paper on the findings appears in the 6 September edition of the journal Nature.
Got a news tip for our journalists? Share it with us anonymously here.
Copyright ©v3.co.uk
Tags:
internet points quantum science spooky telco/isp to