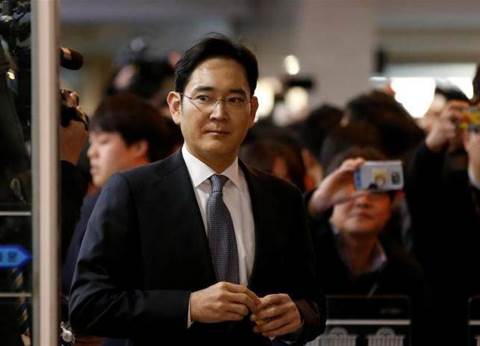 South Korea's special prosecutor has sought a warrant to arrest the head of Samsung Group, the country's largest conglomerate, accusing him of paying multi-million dollar bribes to a friend of President Park Geun-hye.

The special prosecutor's office accused Lee of paying bribes totalling 43 billion won (A$48 million) to organisations linked to Choi Soon-sil, a friend of the president who is at the centre of the scandal, in order to secure the 2015 merger of two affiliates and cement his control of the family business.

The 48-year-old Lee, who became the de facto head of the Samsung Group after his father, Lee Kun-hee, was incapacitated by a heart attack in 2014, was also accused of embezzlement and perjury, according to the prosecution's application for an arrest warrant.

Prosecutors have evidence showing that Park and Choi shared profits made through bribery payments, he said, without elaborating.

Lee is due to appear on Wednesday morning at the Seoul central district court, which will decide whether to grant the arrest warrant.

Samsung, whose companies generate US$230 billion in revenue, equivalent to about 17 percent of South Korea's economy, rejected the accusation that Lee paid bribes.

"It is difficult to understand the special prosecutors' decision," it said in an emailed statement.

Prosecutors have been looking into whether Samsung's support for foundations and a company backed by Choi was linked to the National Pension Service's 2015 decision to support a controversial US$8 billion merger of Samsung C&T and Cheil Industries.

Samsung has acknowledged providing funds to the institutions but has repeatedly denied accusations of lobbying to push through the merger.

"It is especially hard to accept the special prosecutor's assertion that there was improper request for a favor related to the merger or succession of control," it said on Monday.

NPS chairman Moon Hyung-pyo was indicted on Monday on charges of abuse of power and giving false testimony. Last month he acknowledged ordering the world's third-largest pension fund to support the merger of Samsung C&T and Cheil Industries in 2015 while heading the health ministry, which oversees the NPS.

The special prosecutor's office said in its indictment of Moon that Park, through her aides, ordered Moon to ensure the merger of the two Samsung companies succeeded.

Park, 64, remains in office but has been stripped of her powers while the Constitutional Court decides whether to make her the country's first democratically elected leader to be forced from office.

Park has denied wrongdoing but admitted to carelessness in her relationship with Choi, a friend for four decades. Choi, in jail as she undergoes criminal trial and also denies wrongdoing.

Prosecutors opted not to seek the arrest of three other Samsung executives they had questioned, including vice chairman Choi Gee-sung, a group veteran who is seen as Jay Y. Lee's mentor and a likely caretaker head of the conglomerate in the event Lee is arrested.

Investors say that while key Samsung businesses are run by professional CEOs and would not be hurt on an operational basis if Lee is arrested, his absence would slow bigger-picture decision-making.

The Korea Employers Federation, a business lobby, said arresting Lee would undermine confidence both in Samsung and the country's economy, Asia's fourth-largest, and called the special prosecutor's probe "very regrettable."

South Korea has seen numerous corporate scandals over the years. Jay Y. Lee's father Lee Kun-hee was himself handed a three-year suspended jail sentence in 2009 for tax evasion. He was later pardoned.

Public opinion has in recent years grown less tolerant of leniency extended to the heads of conglomerates, or chaebols, for the sake of the economy.