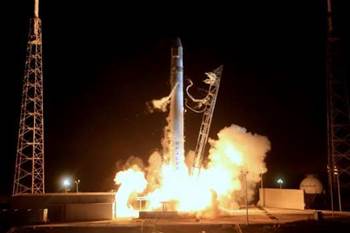 The satellites were launched on February 3 from the Kennedy Space Centre in Florida by a Falcon 9 rocket, but were hit by a geomagnetic storm the following day.

In a geomagnetic storm, energy from the solar wind is transferred to the Earth's surrounding space, and this can cause major disturbances in the planet's magnetosphere.

"These storms cause the atmosphere to warm and atmospheric density at our low deployment altitudes to increase," SpaceX wrote in an update.

"In fact, onboard GPS suggests the escalation speed and severity of the storm caused atmospheric drag to increase up to 50 percent higher than during previous launches."

The geomagnetic storm causing increased drag for the low-altitude satellites which orbit the Earth at just 550 kilometres, so they were unable to leave safe mode.

As a result, up to 40 of the satellites have re-entered or will re-enter the Earth's atmosphere.

Each Starlink satellite costs an estimated US$250,000, meaning the total loss for SpaceX was around US$10 million.

SpaceX said the re-entering satellites pose no collision risk with other satellites, and will burn up while de-orbiting.

The company said no orbital debris will be created and no satellite parts will hit the ground.