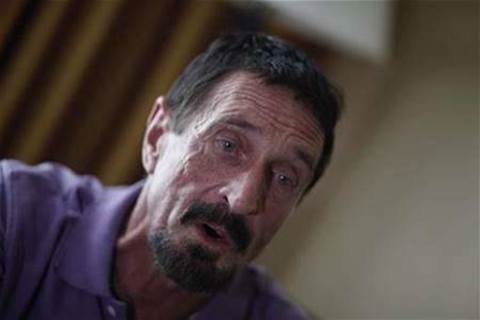 U.S. software guru John McAfee, on the run from authorities in Belize seeking to question him in a murder probe, has been arrested by Guatemalan police.

The Guatemalan interior minister reported that McAfee was arrested for entering the country illegally.

McAfee, who had been in hiding for three weeks, crossed into Guatemala with his girlfriend, Samantha, to evade authorities in Belize who wanted to question him as "a person of interest" about the killing of fellow American Gregory Faull.

McAfee was taken to a residence belonging to the immigration department guarded by a policeman.

On Tuesday, McAfee said he would seek political asylum in Guatemala, which has been embroiled in a long-running territorial dispute with Belize. There is no extradition treaty between the two countries, and there is no international arrest warrant out for McAfee.

McAfee says he fears Belizean authorities would kill him if he returned to Belize for questioning. Belize's prime minister has denied the claim, calling the 67-year-old paranoid and "bonkers."

McAfee has been living in the tiny Central American nation for about four years.

He was one of Silicon Valley's first entrepreneurs to build an Internet fortune. The former Lockheed systems consultant started McAfee Associates in the late 1980s. McAfee currently has no relationship with the company, which has been sold to Intel Corp (INTC.O)