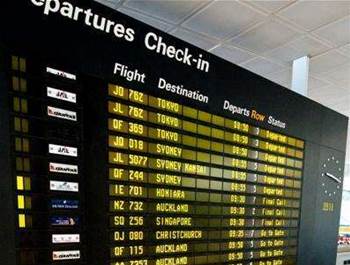 One fifth of flights cancelled at Heathrow.

Thousands of travellers were delayed at major airports across England over the weekend because of a technical problem at an air traffic control centre.

Disruption was reported at most airports including Heathrow, Gatwick and Stansted, after what National Air Traffic Services (NATS) said was a computer glitch at its control centre in Swanwick in Hampshire.

Passengers were being hit by average delays of between one and two hours but the knock-on effects lasted through Saturday afternoon.

NATS said the problem began when its night operating system failed properly to switch over to daytime mode.

"At night, when it's quiet, we can combine sectors of airspace. When it gets busy in the daytime we split the sectors out again," it said in a statement.

"We experienced a technical problem in the early hours of this morning, which means that it hasn't been possible to ... split out the sectors for the busier daytime traffic."

"To be clear, this is a very complex and sophisticated system with more than a million lines of software. This is not simply internal telephones, it is the system that controllers use to speak to other ATC agencies both in the UK and Europe and is the biggest system of its kind in Europe," a spokesperson said.

Flights from Scotland were less affected but many inbound passengers were stranded at overseas airports.