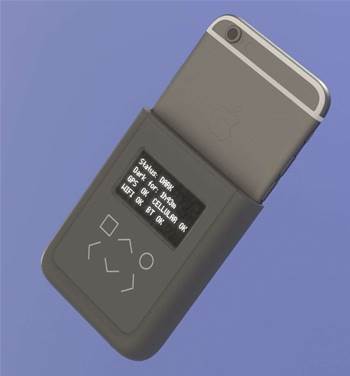 Teams up with hacker to build prototype.

The pair said that journalists, activists and rights workers are increasingly vulnerable and high-value targets, with hostile governments tracking them through their smartphones in order to silence and kill them.

While smartphones and their cameras have become necessary tools for reporters, the devices are also dangerous as they give away their locations.

Putting the devices in flight mode does not provide protection against the tracking, the pair said. On iPhones since iOS 8.2, the global positioning system (GPS) radio remains active in flight mode, and malware can activate transmission functions on the smartphones as well.

The two have produced a detailed theoretical concept of the introspection engine, and envisage the prototype to look like a battery case that slots onto iPhones, and connects via the SIM card slot to route signals from the smartphone motherboard.

A small screen on the introspection engine would alert users if and when any radios, cellular, wi-fi, Bluetooth and GPS, are activated and for how long.

The case would also disconnect nearfield communications (NFC) aerials, as these present an unnecessary danger, and it might also contain a "kill switch" that forcibly turns off all radios.

The introspection engine was presented at MIT's Forbidden Research event overnight, and is being developed "on a shoestring budget" currently, with Snowden and Huang hoping to have a prototype ready next year.

Snowden and Huang gave the example of The Sunday Times journalist Marie Colvin, who was killed in 2012 by Syrian government artillery, to illustrate the dangers of cellphone tracking.

A court case by Colvin's family against the Syrian government alleges that the journalist's cellphone and satellite borne communications were intercepted by agents of the regime, and paired with data from an informant to pinpoint her and other reporters locations, for the artillery assault on them.

The International Federation of Journalists recorded 109 reporters killed in 2015 in targeted assassinations.