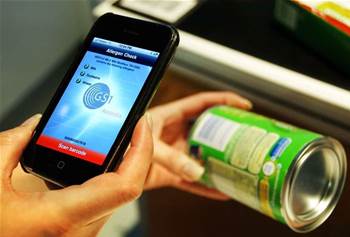 Smartphones equipped with barcode scanners could be the nutritional labels of the future, providing consumers with relevant, detailed information on products sitting on supermarket shelves via user-friendly applications.

Barcode administrator GS1 Australia is collaborating on the international MobileCom initiative, which aims to explore the role of mobile phones in business-to-consumer communications.

In partnership with Nestlé and the Deakin University, GS1 Australia has developed an iPhone application that scans barcodes to detect allergens such as wheat, egg, peanuts and shellfish.

This week, the organisations announced that the application has completed its proof of concept stage, and development work will be moved from the university to GS1 Australia before it is commercially released.

According to GS1 Australia's CIO Steven Pereira, the application relies on GS1's product database that records barcodes and descriptions of more than a million local products.

Nestlé has provided additional information to support testing of the allergen-detecting application. Other manufacturers would be invited to participate at a later development stage, Pereira said.

"The iPhone application is a window to data," he explained. "The data that it is looking into is our electronic product catalogue called GS1net."

Pereira said MobileCom technology was in line with Department of Health and Ageing and Australian Food and Grocery Council (AFGC) plans for "extended food labelling".

"You can imagine the limited amount of data that can be put on the packaging of a Vegemite bottle, for example. But the barcode is always there," he said.

The non-profit GS1 Australia planned to work with department and AFGC to find out what information should be included in a barcode scanning application, and would pursue external funding when the scope of the project is determined.

Pereira said the iPhone application is likely to be released progressively, with allergen-detecting capabilities initially, and additional functionality delivered via updates.

It will be made available on the iTunes store for free. GS1 Australia also plans to develop similar applications for smartphones running Nokia's Symbian OS and Google's Android platform.

"When you read a label the product information is often so small you can barely read it, nor understand it," she said in a statement.

"We wanted to really harness all this information on the bar-coding system and team it up with detailed product information provided by Nestlé to give consumers a tool that had the potential to improve their health and raise public awareness," she said.