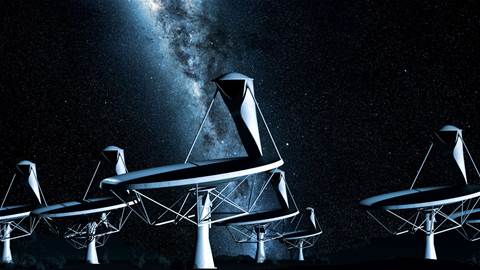 Organisers of the Square Kilometre Array project this week decided to explore new “implementation options” instead of eliminating either the remaining two bids to host the $2 billion radiotelescope.

Australia and New Zealand are jointly bidding against a consortium of eight southern African nations under a site selection process unveiled last July.

The SKA Organisation was expected to decide between the two bids following its first general meeting of members in the Netherlands on Tuesday.

But the organisation announced on Wednesday that it would set up “a small scientific working group” to explore ways to “maximise the value from the investments made” by both potential sites.

“The members [of the SKA Organisation] wished to move ahead with the site selection process and recognised that it is desirable to maintain an inclusive approach to SKA,” it stated.

“This working group will report back to the members at a meeting in mid-May; its report will provide additional information to facilitate the site decision for SKA.”

The SKA Organisation has yet to respond to iTnews’ query as to whether it would locate parts of the radiotelescope at each site.

Brian Boyle, director of the Australia and New Zealand (ANZ) bid, said it would be “premature to comment on the technical feasibility of any specific option until one is actually proposed”.

Last month, reports emerged that the SKA Organisation’s expert Site Advisory Committee had judged the southern African bid stronger than that of Australia and New Zealand.

Boyle welcomed this week’s decision to investigate implementation options, although he declined to comment on speculation that Australia was the underdog.

“I am happy to say that the ANZ team welcomes the establishment of a scientific working group by the members of the SKA Organisation to further investigate siting options,” Boyle told iTnews today.

“ANZ stands ready to play our full part in this process. As part of this process, ANZ will continue to advance the scientific, financial and implementation advantages of the ANZ site proposal.”

Australian Minister for Science and Research, Senator Chris Evans, also welcomed the decision to establish the new working group, noting that the SKA was a unique opportunity for the region to be “at the cutting edge of global mega-science”.

The Federal Government last year committed $40.2 million over four years to its bid to host the SKA, which could attract some $670 million of ICT to the country.

According to Senator Evans, Australia and New Zealand offered an “outstanding, low-risk environment ... with intrinsic radio-quietness; a robust, practical and extensive protection regime; a strong economy and good security”.

“Australia and New Zealand have demonstrated that the SKA can be cost-effectively built at the Murchison site in Western Australia, including taking advantage of the existing fibre-optic network,” he said.

“The existing infrastructure, in which we have already invested heavily, is world-leading, and, if our site is selected, there is further funding available to ensure the project’s success.

“The Australian and New Zealand governments are more than ready to host the SKA project.”

South African Minister of Science and Technology, Naledi Pandor said she was “disappointed at the delay” and hoped the SKA Organisation would make a decision in the first half of this year.

The SKA Organisation was established in November by Australia, China, Italy, the Netherlands, New Zealand, South Africa and Britain.

The board this week approved an application for Associate Membership in the SKA Organisation from India.