Should you bring a smartphone to a protest? 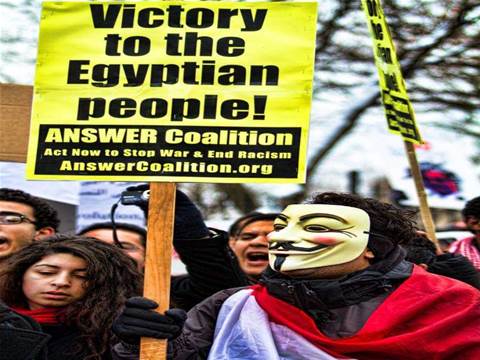 Smartphones have given New York's Occupy Wall Street protesters a useful tool to document and deter potential police misconduct, but Australian protesters should think twice about their use.

Whether documenting action on Wall Street or Martin Place, protesters face the risk that police demand they hand over their smartphones.

For the protester or citizen journalist, this could knock out communications with peers, damage hours of work, and worse, may provide police a treasure trove of evidence.

On top of all this sits the cloud and data held within applications such as Facebook, Twitter, Foursquare and so on.

"Seizing a phone is rich intelligence for police, including contacts and details of other protesters and organisers," says former Federal Australian Police investigator Nigel Phair.

He doubts police have the right to take a protester's phone merely for communicating and coordinating with other protesters, but points out all an officer needs to legitimately seize one is "reasonable grounds to suspect that the device contains evidence against the commission of an offence."

"This is obviously quite a low threshold," says Phair.

Many people assume police require a warrant to seize a phone, but an arrest will usually suffice when the device is just an object held by the person in a public space.

"The difference between a member of society and the police is that police can arrest based on a reasonable suspicion," says former NSW law enforcement officer and CEO of Pure Hacking, Rob McAdam.

"When the police arrest, they can take implements used in the commission of the crime."

What matters is whether the protest is "lawful" or not, which could quickly change if tempers flare and opposing sides of the blue line, transforming a peaceful protest into something more explosive.

Phair noted that police could also obtain passwords for smartphone access through a court order. Those who refuse face up to two years in prison.

The risks sound fairly low but it's something to consider before attending a protest armed with a smartphone that's carrying months or years of information about the user.

Also, if a seizure does occurs it happens in the reverse order to a warrant-based raid on a property. Police have the device before they have written authority to search it, and how difficult that part will be depends on how well the device has been secured.

"Protecting your technology in Australia is a bit tricky and I think it's fair to say it'll get trickier as technology improves," says online rights campaigner Geordie Guy.

"Already if police seize your phone they probably have contact details of hundreds of people you know, your photo albums and home videos."

The US-organisation Electronic Frontiers Foundation (EFF) last week released advice for Occupy Wall Street protesters, stressing the need for them to prepare devices for the moment it is seized.

"Think carefully about what's on your phone before bringing it to protest," it warns.

Protesters should also activate password-protect, set the timeframe for the phone to require a password to 'immediate', and explore the device's encryption options.

For the more security conscious, even built-in encryption features such as those available on iOS devices have their limitations, in particular for videos and photos.

"User generated content (Movie, photos, recordings, videos, music, podcasts, etc) are available to anyone who has physical access to the device."

Anyone can access this content by connecting it to a machine running a version of the open source Ubuntu operating system, without a password, he says.

While EFF urges protesters to take photos and video to discourage police misconduct, there may also be times at the protest when it is best not to have the device.

For those heading to an area where an arrest and seizure is more likely, it recommends handing the device to a friend who is out of the firing line.

Given the time may it take for police to return the device, it recommends to back up the device prior to attending the protest to ensure continued access to critical data.

And if police demand a protester gives up the password to a seized device, the EFF advises to politely refuse the request and ask for a lawyer.

"Remember you have the right to remain silent," it says.

Much of the EFF's advice could apply to Australian protests, but Australians need to be "extra careful", says EFA's Guy.

"If attending a situation where a device could be seized, I'd advise moving all content -video, photo, apps - off temporarily. If you still have whatever phone you had before your current one, continue taking that," he says.

The last thing a protester wants to contend with is police demanding the passwords to the device. While the power to search a seized device is the subject of court action in the US, according to Guy, Australians face the risk of obstructing an investigation.

"If you are asked to provide access to the device to facilitate police seizure of its contents and you refuse, police will consider you to be obstructing them. It's remarkably easy to obstruct police in Australia, even asserting that you don't remember something that you do will get you in trouble," he says.

"If we're further down the path and it's in court, refusing to unlock something as directed by a court order is contempt and leads to a layercake of trouble."

Besides, if police really want to get the data on a protester's device, they have time on their side.

"If you refused to supply the password, password cracking tools have solved that problem. That is only a matter of computing resources and time," says Pure Hacking's McAdam.