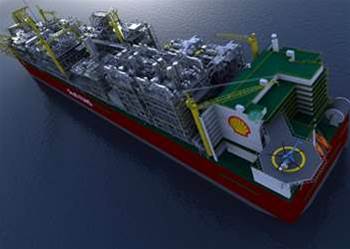 The $12 billion facility, which will be deployed to the Browse Basin off Western Australia, is 488m long and 74m wide, and will be permanently moored in about 250m of water.

The Technip Samsung Consortium building the Prelude vessel in South Korea has named Emerson Network Power as the main supplier of uninterruptible power supplies (UPS) to the project.

Emerson will provide its Chloride UPS systems — often seen in data centre environments — to back up the "main automation systems, fire and gas detection systems and telecommunications", along with emergency lighting, on Prelude FLNG.

Emerson subcontracted the portion of its contract dealing with back-up battery arrays to Swedish firm Alcad in a deal worth about €1 million ($1.5 million).

"In the event of a loss of power from the main generators the Alcad batteries will provide between 60 minutes to four hours of reliable autonomous operation," Alcad said in a statement.

Alcad said its arrays had the advantage of fitting in a relatively small footprint.

"This is especially important for the Shell Prelude project as, despite its impressive proportions, the facility is one‐quarter the size of an equivalent plant on land," the battery maker said.

"This has called for the designers to seek every opportunity to save space."

The LNG industry generally is looking at floating plant as a way to cut the costs of exploiting offshore gas reserves.

Costs would otherwise typically include piping gas from the offshore reserve to an onshore plant for processing, and supporting infrastructure around the onshore-based plant.

Emerson Network Power isn't the only IT-oriented vendor to gain work on the Prelude project.

Alcatel-Lucent was contracted to fit telecommunications and entertainment systems to the vessel, while Wood Group put in a $10 million computerised maintenance management system.