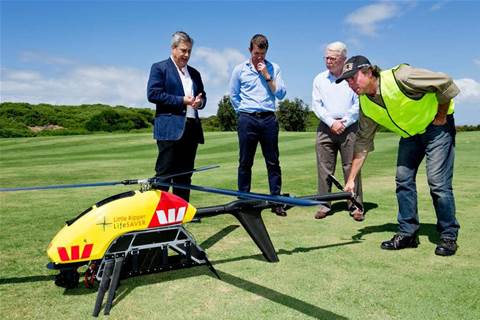 Little Rippers to be trialled for six months.

Surf Lifesaving NSW is trialling unmanned aerial aircraft to be used for shark detection, which it hopes will complement an existing fleet of rescue helicopters.

Named Little Rippers, the drones cost $250,000 each and were launched yesterday at Surf Lifesaving NSW's helicopter base at La Perouse in Sydney.

The battery-powered Vapor 55 drones are made by US company Pulse Aero and have a maximum hover endurance of 45 minutes, and can fly in winds up to 66 kph.

Batteries for the Vapor 55 can be charged in less than an hour, according to Pulse Aero specifications.

Allowable payload with full battery size is just over 4.5 kg: this can include high-resolution digital cameras and infrared sensors.

Data is transmitted via an encrypted Ethernet wireless link with a maximum reach of 8 ks, at 50 megabits per second.

Surf Lifesaving NSW is also looking at whether the drones can carry a marine rescue pod with an inflatable life raft for three people, and an emergency position indicating radio beacon station.