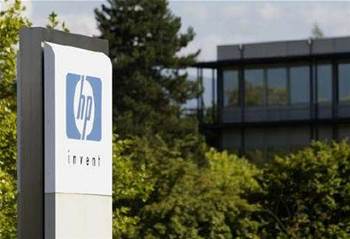 Hewlett-Packard has trimmed its 2011 revenue projections on waning consumer demand for its personal computers, sending its shares more than 10 percent lower despite exceeding profit expectations.

Sales from its personal systems group slipped one percent as the company's PC sales in China continued to struggle. Revenue from its giant services arm slid two percent.

"The net of it was you had a miss on the PC side, and that's clearly not bouncing back," said Cross Research analyst Shannon Cross. "People are worried about the ability of HP to show strong growth."

"People are probably going to look at this and expect they will need some acquisitions to drive more topline growth."

The fiscal first quarter was the first for new Chief Executive Leo Apotheker, who has already put his stamp on the company in his first few months on the job. HP added five new directors to its board in a major shakeup last month.

The world's largest technology corporation by revenue raised its forecast for fiscal 2011 non-GAAP earnings, predicting a profit of US$5.20 to US$5.28 a share. But it trimmed its revenue outlook to a range of US$130 billion to US$131.5 billion, from a previous US$132 billion to US$133.5 billion.

HP said on Tuesday it lowered its yearly sales outlook due to weak demand for consumer PCs, and slower-than-normal growth in HP services. These include data centre setup, IT outsourcing and other businesses in which the company is working to improve its short-term signings.

"If you use Q1 as a marker, it's clear that we do a lot of things well at HP. It's also clear that we have isolated areas we need to improve," Apotheker told reporters on a conference call.

Revenue rose four percent to US$32.3 billion, but fell short of Wall Street's estimate of US$32.96 billion.

"They did a good job on the bottom line, a little bit light on the revenue side. Services and software were a bit weaker than expected," said Gleacher & Co analyst Brian Marshall.

Before Tuesday, HP shares had largely rebounded from lows touched after the surprise ouster of CEO Mark Hurd last August. The stock had been up about 14 percent this year.

But investors are still eager to learn more about Apotheker and his long-term vision for HP. Apotheker is expected to share his strategy at an event for analysts and media on March 14.