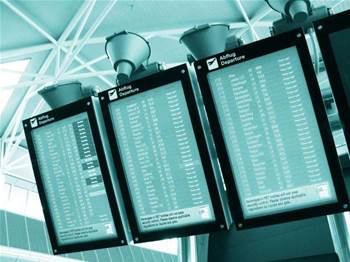 The Amadeus check-in system is reported to have suffered intermittent outages between 8.25am and 9.30am AEDT, forcing Qantas and other airlines using the system to check in passengers manually.

Travellers were told to expect delays of up to an hour for domestic flights. Three international Qantas flights also were delayed.

Qantas has been partnered with IT solutions provider Amadeus since 2000.

In November 2009, passengers suffered similar delays due to a three-hour-long crash of the Amadeus check-in system.

Qantas group executive for government and corporate affairs, David Epstein, told reporters that Qantas would be taking the matter up with Amadeus to ensure the problem would not occur again.

"We'll be asking them to take appropriate measures to ensure our customers are not left waiting like this anytime in the near future," he said to The Australian.