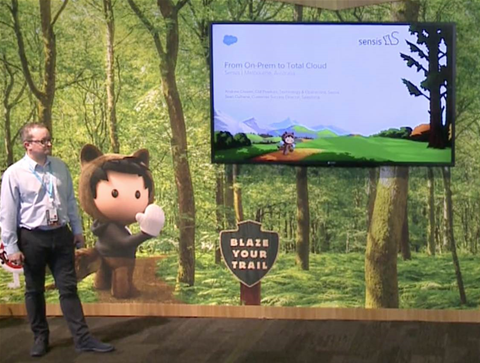 Everything's in AWS and Salesforce now.

Sensis ditched its entire on-premises infrastructure over the past three years and is now running its business across AWS and Salesforce.

The company, which is 70 percent owned by Platinum Equity and 30 percent by Telstra, pulled off the major cloud-only transformation to afford itself a “chance to have a future”.

General manager of product, technology and operations Andrew Crozier told Salesforce’s Dreamforce 18 conference that the company had been running on systems “delivered in 1983”.

“Our platforms were incredibly stable but unfortunately unable to be changed,” Crozier said.

“We could never get any business cases [for change] improved internally because the cost involved or the time involved in actually delivering against those business cases normally meant that the value the output would create just didn’t stack up.”

Sensis, however, had to change. It had already shifted from being fully Telstra-owned in 2014, but it also existed in a marketplace that “has changed dramatically over the past 15 years,” Crozier said.

“For us to have any chance of succeeding in the future, we needed a platform to enable us to do that.”

Over the past three years, Sensis has moved its entire business operations to run in the cloud - either in a large Salesforce-based stack or onto AWS.

“We first of all had our large transformation program to move our platform onto Salesforce and CloudSense,” Crozier said. CloudSense provides omnichannel commerce services on Salesforce.

“Subsequent to that also we’ve moved the remaining parts of our business - all of our systems, our platforms and capabilities - onto AWS.

“It’s been a really significant change program for the Sensis business.”

The move to cloud means the company no longer runs its physical data centres or hardware.

“We have no tin in the building whatsoever,” Crozier said.

Crozier did not provide a detailed examination of the company’s AWS infrastructure, but noted that the Salesforce clouds hosted the majority of data associated with its traditional directories business.

Crozier said Sensis is a “heavy” Salesforce user and had introduced a “high” amount of customisation to its four Salesforce orgs (though he also said that “one of the lessons we’ve probably learned as we went through this process was try not to customise the platform quite as much as we did”).

A major change enabled through Salesforce is that Sensis can now talk to customers across channels other than face-to-face or phone-based communication.

“White Pages is 140 years old in Australia. For the last 140 years we have only ever transacted with a customer either face-to-face or over the phone,” Crozier said.

“We have never been able to communicate in the White Pages business with our customers in an electronic format.”

The company is using marketing cloud and Pardot to engage customers and stay connected with them.

It also offers self-service where customers can log into a frontend that backs onto Salesforce community cloud and “check their account balance, find out about their content, or make requests to edit their content.”

“We sent out communications to customers with offers using Pardot, and we were able to get a straight-through sale process through [community cloud] which was super exciting for us as a business,” Crozier said.

“If we want to be a digital business, being able to deliver that capability is fundamental.”

Moving to Salesforce - and cloud in general -  “fundamentally changes the cost model of the business”, Crozier said.

Sensis also took the opportunity to create an agile release process to take advantage of the new platforms.

In the past two years, it has driven “21 major releases and 64 minor releases” through this process, compared to prior decades where no change was possible.

Crozier said the development of the process had been “very much experimental.”

“We’ve worked our way through and pivoted on how we’ve gone about doing this,” he said.

“We have a two week feature cycle and we have an eight week major change cycle. We have changed and moved those timings around and we’ve also had to look at the various ways that we prioritise.

“Fundamentally we think we’re now at a point where we’ve got it reasonably well optimised but we’re continuing to work together collaboratively between different parts of the business to make sure the approach is working for us.”

The new cloud-based operating model had also enabled Sensis to create new businesses outside of its traditional directories core.

“Earlier this year we were able to deliver our first non-directory product,” Crozier said.

“It’s exciting because the product takes what we’ve done in our legacy and hopefully makes it relevant for the future.

“Our challenge has been customers not only need to manage their information in White Pages, Yellow Pages and True Local, but also in outside platforms like Google, Facebook and Bing.

“Our new product allows customers to manage all their connection data on our platform and we publish that information out to all the other places,” he said, noting it was powered entirely through APIs as well as custom development on Salesforce.

Crozier said he saw the model championed in this instance as a “foundation for the future” of the Sensis business.