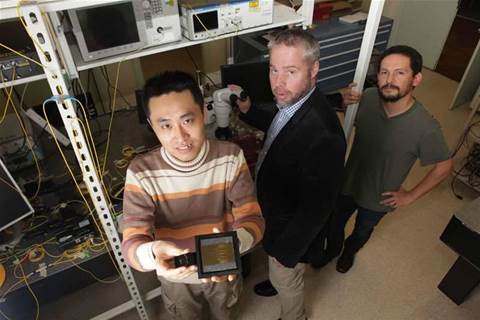 The research was part of the Centre of Excellence for Ultrahigh Bandwidth Devices for Optical Systems’ (CUDOS) Quantum Integrated Photonics project, which aimed to develop a chip capable of both generating photons and performing logic operations within five years.

With collaborators from the UK and France, the CUDOS team demonstrated an 80-micron-long emitter of correlated photon pairs – 100 times smaller than devices used by other groups.

CUDOS director Ben Eggleton explained that the device could be one way of generating quantum bits (qubits) for future quantum cryptographic and computing applications.

“There’s an international race to create the building blocks of these quantum technologies,” Eggleton told iTnews.

“Sure, it’s still a long way from application ... [but] it’s an important step to quantum information systems.”

The so-called ‘photonic crystal waveguide’ was fabricated on a silicon chip and expected to be scalable and compatible with current manufacturing techniques.

According to the team’s research paper, to be presented in Baltimore, USA next week, photons generated by the device would be routed for use in quantum logic gates or communication protocols.

Eggleton explained that the device took a statistical approach to qubit generation, in contrast to smaller, single-photon-generating quantum dots.

Its size was achieved by slowing light that passed through the device by a factor of 20 to 30, and thus increasing the non-linear effects of the waveguide.

Researchers expected the size of the device to allow hundreds to be incorporated into a single chip.

The next step for enabling its use in ‘unhackable’ quantum key distribution networks was to create entangled photons, Eggleton said.

While the quantum information market was “not a huge one at the moment”, he said CUDOS researchers would collaborate with organisations like the Sydney University’s upcoming Institute of Nanoscience on fabrication and manufacturing techniques.

Eggleton also hoped to combine the emitter with research by University of Bristol professor Jeremy O’Brien, who in 2009 demonstrated a quantum logic circuit that could factorise the number 15 (pdf).

“It scales incredibly quickly,” he said of O’Brien’s work, noting also that the three-month-old CUDOS project was on track to deliver the “world’s first chip-based quantum information device” within five years.