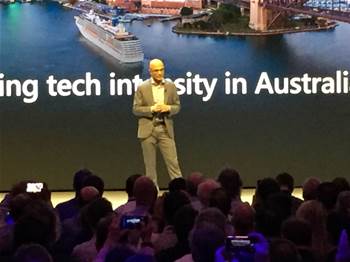 And LinkedIn could steal yours.

The venues major technology companies pick for their CEO stand-up shows tells you a fair bit about the image they are trying to convey to customers, whether it’s an industrial pack ’em-in convention centre or somewhere a little more relaxed and down to earth.

On Wednesday Microsoft’s CEO Satya Nadella opted for the multi-function industro-chic arts precinct of Carriageworks, the former production and maintenance line for NSW once great train fleet that is slowly having its network restored.

It’s a phoenix site, befitting of a company saying it’s got its mojo back. On the sidelines, where organic providores sell $20 bottles of artisanal cordial and heirloom kale to hipsters on Saturdays, are the obligatory swag stalls and demo displays.

Our favourite is the self-learning AI Star Wars pinball machine, whose minders are politely asking punters not to shove smartphones in front of its reference field because it buggers up the cameras feeding in data.

There are model train sets too, as well as futuristic work pods apparently designed to let you attend to work while travelling in an autonomous ‘Mobility as a Service’ capsule on road, air or sea.

Despite the Star Wars pinnie, there is no mention of Project JEDI, the US military cloud play that’s set Microsoft apart from AWS and caused industrial strife at Google.

Nor any mention of an Office365 outage that seems to hit right on cue.

Instead there are drones that spot weeds in Kakadu, real time pathology results that hit secure Azure cloud and some Qantas VR for aircraft engineers. And Westpac, who just as Nadella hits the stage, is copping regulatory action for 23 million breaches of AML/CTF rules.

One stat Nadella calls out pops a few eyebrows in the invited fanbase.

He says that according to LinkedIn there are now more jobs being advertised for in-house devs in regular companies than IT companies. Everything is now tech enabled, so much so that destiny is defined by quality of devs.

Less clear is if, how and when Microsoft plans to blend LinkedIn with Teams, which is now bigger than Slack.

Because that could be a level of vertical integration and labour market control that could make people both dependent and uneasy.

If you think people are protective of their private life, imagine the prospect of your software supplier owning the world’s biggest HRMS system and potentially selling data on you staff.

Nadella repeatedly makes the point Microsoft is about people before technology. LinkedIn is living that dream.