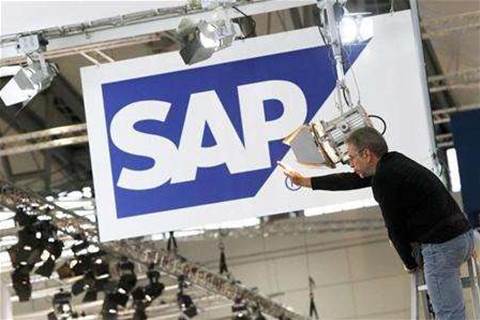 A worker adjusts a spotlight at the SAP booth in preparation for the CeBIT fair in Hannover February 28, 2010. Credit: Reuters/Thomas Peter/Files

The two companies announced the deal on Wednesday, but did not divulge financial details. Two sources familiar with the matter told Reuters that SAP paid between US$1 billion and US$1.5 billion for the company.

The SAP-hybris transaction is expected to close in the third quarter of this year. Founded in 1997 and based in Zug, Switzerland, hybris is focused on e-commerce technology.

It generated around US$110 million in revenue in 2012 and has about 500 customers worldwide.

Its majority investor is HGGC, a private equity firm based in Palo Alto, California.

Talks with SAP began about five months ago, a second source familiar with the matter said.

SAP — similar to No. 1 rival Oracle — has been trying to transform itself into a cloud player and reduce its reliance on traditional business software.

Last year, the company acquired networking and online commerce software developer Ariba in a deal valuing the business at US$4.3 billion.