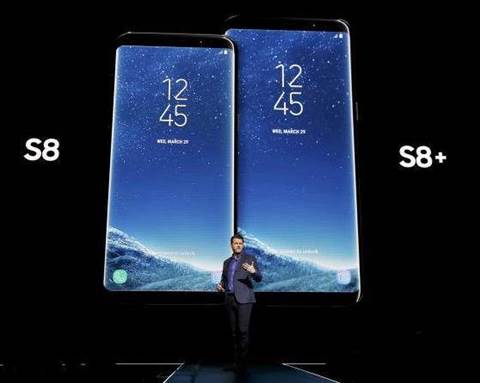 Hopes to recover from exploding Note 7.

Samsung has unveiled its two Galaxy S8 flagship smartphone models, as it battles to regain the market leadership it lost to Apple after the embarrassing withdrawal of the fire-prone Note 7s.

Boasting some of the largest wrap-around screens ever made, the long-awaited S8 models are the South Korean technology company's first new premium phones since its September recall of all Galaxy Note 7 smartphones equipped with fire-prone batteries.

Samsung halted Note 7 sales in ten markets, and the phones were banned from aircraft worldwide, denting a revival of the firm's mobile business.

Two versions of the Galaxy S8 were launched at a media event in New York.

Both models feature 64GB of storage expandable to 256GB, a 10 nanometre process 64-bit octa-core processor, and 4GB of RAM. Google's latest Android version 7.0 is the operating system on both.

The S8+ model gets a larger, 3500mAh non-removable battery compared to the 3000mAh power pack in the S8, and the case is IP68-rated for water and dust resistance.

Both have a 12MP rear camera with dual-pixel autofocus and an f/1.7 aperture lens that can be used to read barcodes, translate foreign languages automatically, and other context-sensitive features. The front camera is 8MP, and comes with autofocus.

The company has kept the iris scanner for user authentication that it introduced with the Note 7, and there is also a rear fingerprint sensor, and facial recognition capability on the phones.

Australian pricing for the S8 is $1199 and $1349 for the S8+. Samsung is taking preorders from March 31, with Gear VR virtual reality goggles bundled.

"We must be bold enough to step into the unknown and humble enough to learn from our mistakes," DJ Koh, the company's mobile chief, said at the event after acknowledging that it had been a challenging year for Samsung.

Samsung is hoping the design update and the new features, focused on making life easier for consumers, will be enough to revive sales in a year Apple is expected to introduce major changes to its iPhones, including the curved screens that have become staples of the Galaxy brand.

The S8 is also crucial for Samsung's image as a maker of reliable mobile devices. The self-combusting Galaxy Note 7s had to be scrapped in October just two months after their launch, and the recall was particularly damaging, investors and analysts say.

"The Galaxy S8 is the most important phone for Samsung in a decade and every aspect will be under the microscope following the Note 7 recall," said Ben Wood, a veteran smartphone industry analyst with UK-based CCS Insight.