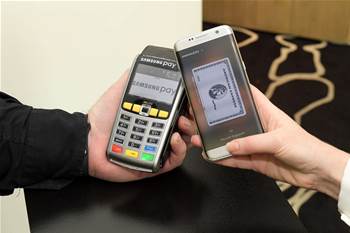 American Express and Citibank customers will be able to make mobile payments on their Samsung smartphones from today as Samsung Pay goes live in Australia.

Australia becomes the fourth country to introduce Samsung Pay behind the US, China, Spain and South Korea. The mobile payments platform will go live in Singapore tomorrow, and the company claims the technology has surpassed 5 million registered users.

Citibank credit card customers and American Express card members can use the service from today. Up to 10 payment cards can be registered in Samsung Pay.

The platform is based on technology developed by LoopPay, which Samsung took over last February.

It joins Apple Pay, which arrived in Australia last November thanks to a partnership with American Express and became available for ANZ Bank customers in April, and Android Pay, which announced bank partnerships last year and is expected to launch imminently.