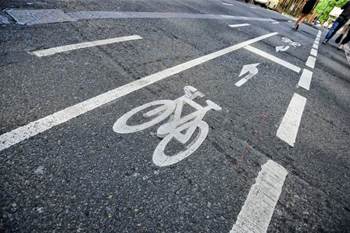 Will store up to 700 bicycles.

Sydney’s ever growing hordes of cycling commuters could soon be given low-cost public access to the city’s – and possibly Australia’s – biggest underground bike shed when Salesforce throws open the doors to its new $1.5 billion, 57-storey Circular Quay headquarters in 2021.

Details contained in builder Lendlease’s plans for the giant redevelopment of the former Jacksons on George site reveal it will house around 700 secure parking spots, with 250 of those available to the public through a “cycle hub” accessed via the City of Sydney.

Documentation for the development, which is now underway, spruiks the facility as “sitting directly beneath the George Street Public Plaza”  and having “capacity for circa 250 bikes in Sydney’s first public bike hub, which includes a bicycle maintenance station.

“The hub is available to anyone who rides into the city, and use is available on a low-cost membership basis through the City of Sydney.

“This is in addition to the world-class end-of-trip facilities and circa 450 bikes located within the tower to accommodate workers.”

We suspect this translates to a two-tier offer.

Salesforce employees and other paying tenants will likely get hot showers, fluffy towels, lockers and potentially a “sweats” service to launder their lycra between trips, while public users will get more basic bike cage access alongside a “bicycle maintenance station”.

Catering to the needs of exercise-addicted staff is no small thing for tech giants, especially when creature comforts can make the difference between attracting and keeping sought-after talent, over letting them jog across to competitors.

Microsoft in the US famously restored its staff laundry service after it was yanked as part of Steve Ballmer’s infamous US$1 billion cost cull in 2004 that resulted in high profile talent defecting to then up-and-comers like Google.

Google is also perhaps the best known purveyor of workplace perks for staffers, notably its free staffed kitchen inside its decidedly un-office-like workspaces that extoll free-range productivity coupled with kooky features like slippery dips and monorail cars for meeting rooms.

Sydney has also been long rumoured to be in Google’s sights as the preferred second city for its Sidewalk Labs smart city play that is already rolling out in Toronto.

At the same time, the broader ‘activity based working’ trend, alongside so called hot desking has pioneered by tech companies has now become mainstream in corporate office fit outs, like CBA’s two new builds in Darling Harbour and Eveleigh.

Major vendors are similarly upping stumps from once heavily technologized precincts like North Sydney and St Leonards as commercial property renewals come online, with IBM gradually moving into the CBD as its core base.