Rush to cheaper software worth $19b: Reserve Bank of Australia 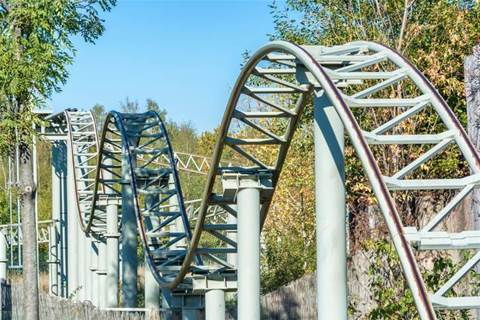 It was just one graph, but it said it all.

Prices paid by businesses for software in Australia might be falling, but enterprises down under are spending money at close to dotcom levels on code – only this time it's to optimise their operations rather than chasing a meme.

That’s the take from one of the most remarkable snapshots of local investment in software yet, produced not by an analyst firm or vendor, but the by the Assistant Governor for the Reserve Bank of Australia’s Economic division, Dr Luci Ellis.

It’s a highly significant number, not least because it (partially) documents the broader role of computing in the national economy.

In fact, software investment levels in Australia are now primed to punch through one percent of nominal GDP (gross domestic product) that stands at $1.9 trillion.

And in case you wondered where the skills shortage came from, the software cut of that pie is easy to measure and equates to (roughly) $19 billion.

It's a  a sustained trend that, over the last ten years or so, shows more local money is  broadly and consistently being poured into software smarts – and as a core part of the economy rather than because of a sugar hit or cyclical factor.

Based on RBA and Australian Bureau of Statistics (ABS) data, Ellis bowled-up the chart and stats – Computer Software Investment; Share of Nominal GDP – in a speech last Friday that sought to demystify how the central bank sources, charts and uses data to make economic predictions.

Notably, the chart (below) isn’t part of a regular series, but was put together specifically to illustrate what to factor in or out when trying to determine what indicators to use when plotting where the economy is headed. 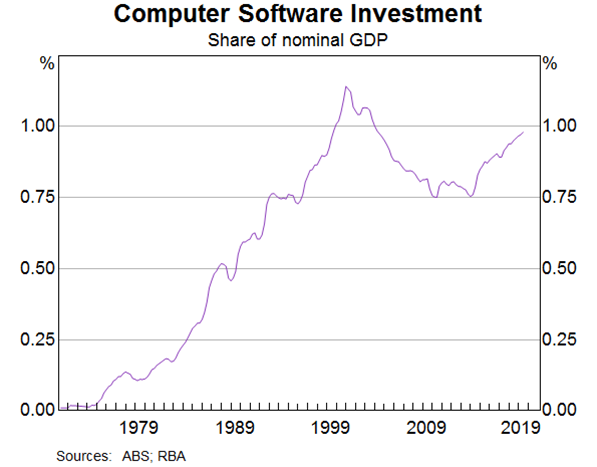 In the past that might have been new car sales, spend on industrial plant and equipment, retail turnover … but now it’s software, at least for the purposes of Ellis’ speech, memorably titled “Lumps, Bumps and Waves”.

She's not afraid to chunk down the concepts or simplify the lingo either.

“Simple, non-technical descriptions can show why it's useful to know something about the underlying shape of a particular special factor. If something is a lump or a bump, it doesn't mark the beginning of a change in trend. Its effect may not last,” Ellis observed.

“In developing our forecasts or setting monetary policy, we might want to look through those lumps and bumps, and focus instead on the longer-term trends.”

Even more simply, it's "the signal in the noise".

"We have to be careful to avoid seeing paradigm shifts in every wiggle in the data. But structural change permeates the economy, and always will," Ellis said.

But these days software spend isn’t just a business trend, it’s a broader wave of change triggered by factors external to the economy,

Ellis notes there are a few ‘bumps’ on the chart “culminating in a peak around the dot-com boom and Y2K rectification work” where it peaks at just over one percent of nominal GDP in the very early noughties before taking a very unceremonious slide until around year before the GFC.

Then, around 2012-2013, software investment takes off like a rocket – Amazon Web Services put its first DC on Australian soil in 2012 – before near vertical growth gently tapers but still stays strong.

“More recently, this type of investment has again been increasing faster than the economy as a whole, as firms adopt mobile, cloud and other new technologies,” Ellis observes.

The thing to remember is that the graph is tracking software investment across the economy rather than just against previous sales, revenue or pricing.

So even if software, especially cloud and SaaS, fell in price compared to on-prem, it became more accessible and affordable, presumably at the expense of hardware.

There’s good reason for RBA to be sticking its nose into Australia’s software sector too.

Not least because things once loosely categorised as ‘digital’ are now influencing the shape of the broader economy, and with it the outlook for jobs and growth.

Australia’s conundrum is that wages growth has remained stuck and some parts of the economy are doing far better on the digital front than others.

The influence of software and technology on the economy, or the so-called tech effect, was called out by RBA Governor Philip Lowe in June 2018.

The picture Lowe painted at that time was a paradox where there was still spare capacity in the labour market, yet firms found it harder to get suitable workers, with little or no translation to increases wages.

Ellis’ chart is the latest valuable piece in figuring out that puzzle.