Running an IT shop in a combat zone 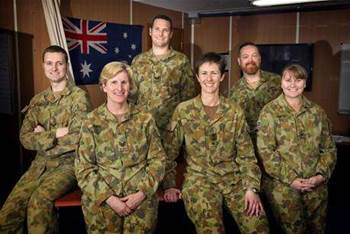 Meet Australia’s IT boots on the ground in the Middle East.

It's not your typical IT shop, but ADF captain Tegan Davey insists her day job in the Middle East information management cell isn’t too different to a regular job in IT support.

As one half of Defence’s Theatre Information Management Cell, Davey has spent the past three months deployed to the region.

She's charged with making sure Australian forces can share information across their protected and secret networks, and that the critical data is securely archived back to Australia.

Her team is part of the 400-strong ‘Operation Accordion’ support group, which props up a deployed user base in its hundreds.

The Cell usually numbers just two - Davey and a webmaster - but has temporarily swelled lately as the team lays the finishing touches on a new Sharepoint system for the ADF in the region.

“A day can consist of a mix of things. We have ongoing project work we are doing, migrating data and handling user requests as they come in," she told iTnews.

“Some days we get a lot of project work done, but other days our hands are full supporting users."

The last stages of data migration are all that remains of the Sharepoint implementation, which Davey says will transform the way the ADF stores and re-discovers archives of its time in the Middle East.

Records of the day-to-day operations of Australian troops can prove essential years down the track, when they are sought out by military historians, auditors, and claims assessors for the Department of Veteran’s Affairs.

“We had to think about how we would get that data back to Australia in a way that it can be organised and found again,” Davey said.

“The problem was not so much having information stored on site. It was more that it was stored in so many different locations and at the end of the day it all needed to be collected and sent somewhere it can be archived and searched easily."

Part of the Sharepoint rollout has involved the automatic replication of data back to Australia, Davey said, which has allowed her team to get rid of the many storage drives that had previously been used to back up information.

If anything about the Cell’s work is unique, she said, it's the extra change management burden that comes with such a high turnover of users, who are usually only deployed for several months at a time.

“We have new people coming in all the time and nobody likes change," Davey said.

“The thing about Sharepoint is that it requires a bit more thought from the user than the usual drag and dump approach.

"But we have launched a massive education campaign to ensure that we really understand what the user requirements are."

A career ADF employee, Davey will spend another three to four months in the Middle East before returning to Australia and handing the reins to another defence force member to continue allowing information to flow across the operation.

“My favourite thing is the tempo over here. Things are dynamic, so they happen fast,” she said.

“I also really enjoy the engagement with the end users. It means I get an understanding of a whole range of defence and military capabilities.”