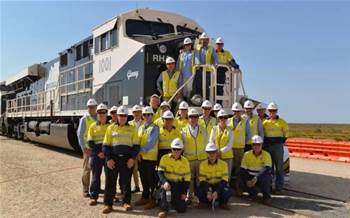 The Gina Rinehart-backed Roy Hill mine has taken delivery of 14 GE locomotives that will one day form part of a completely automated haulage operation from pit to port.

The "mega" project in Western Australia's Pilbara region has ordered a total of 21 of the advanced locomotives which come equipped with a technology system known as 'Locotrol'.

One of Locotrol's key functions is distributed power control, which coordinates braking and traction over the length of the train.

In Roy Hill's case, trains are expected to have three locomotives and 232 cars, spanning over two kilometres, according to new information revealed by GE.

Locotrol is also the key system that underpins automation functions of the trains.

A centrepiece of Roy Hill's design is autonomous trucks and trains, and a remote operations centre in Perth that will operate and manage the mine.

Out-of-the-box, Locotrol "will automatically drive the locomotive at very fine speed control" in the loading area, ensuring each car is filled with an optimum amount of iron ore.

"You need accurate control of the train to make sure it's not over- or underloaded."

Once on the journey to the port, the train driver can also use Locotrol to check a wagon. Usually this would involve stopping the train and walking the length of the train in the Pilbara heat to the problem wagon, GE said.

However, with the Locotrol control system, "the driver—instead of getting out and having to walk up to two kilometres to that wagon—gets out, stands by the train and, using Locotrol's portable hand-held unit controls it remotely to go past him, until it gets to the point he needs to attend to," Borden said.

There remains no indication on when Roy Hill's trains would go to a full driverless model, though it is still part of the plan.

"The holy grail ... is ATO—automated train operation, commonly known as driverless operations— which will likely be added to Roy Hill's already hi-tech system in the near future," GE said.

Roy Hill Holdings chairman Gina Rinehart told a locomotive "christening" event at the mine earlier this week that the entire mine project was "more than 75% complete".

"Importantly, [it is also] on budget and on schedule to deliver first ore on ship within the scheduled timeframe of by end September 2015 – in line with a very fast paced schedule," she said.

"For an Australian project of this magnitude, this is an incredible achievement."

Roy Hill rivals Rio Tinto and BHP Billiton are also going down the automated haulage path with remote control operators based in Perth.