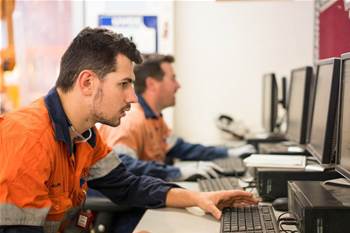 Invites people to step out of business-as-usual roles.

Rio Tinto is setting up a new “pioneer lab” in Brisbane that takes people out of a business-as-usual setting and asks them to create new digital and technology pilots.

CEO Jean-Sébastien Jacques told the IMARC conference in Melbourne on Tuesday that the mining giant needs to do more to stay a pioneer in the industry.

Jacques indicated that mineral recycling schemes could take a chunk out of the requirement for mining in the future, and the industry needed to be prepared.

“Our technology partner Apple, has a goal to recycle 100 per cent of the metals and minerals that go into our iPhones, iPads etc, and where Apple goes, others will follow,” Jacques said. [pdf]

“What does this mean for our industry? This may mean we need to pioneer new ways to mine or think seriously about our business models at some point in the future.

“There’s no question. This will be difficult, and it will take a long time, and as the saying goes, we will need to break a lot of eggs to make the omelette. But that’s okay.”

Jacques said digital technology was already forcing miners to rethink their operations. Spare parts could be printed onsite instead of taking days to be shipped, for example, and the entire end-to-end value chain was increasingly being automated.

Jacques was clearly worried that the pace of technology change - and the investment required to keep up - could leave Rio Tinto behind.

The company has traditionally been a pioneer in its industry, being relatively well advanced in automation, data analytics and visualisation.

But these have often been big ticket projects; roboticizing its trains has been a $1.2 billion project alone.

“The challenge for us all is how to apply [new technologies like] AI and the internet of things in an industry where the introduction of new tech has often meant big capital outlays,” he said.

“Clearly we are not going to get out of bed tomorrow and become Microsoft, or another software company, that isn’t the point.

“The point is how do we move into the digital age in a way that means we retain a competitive advantage?

“The key to this is to start small, with technology and digital pilots and scale up.”

Jacques said Rio Tinto would try to achieve that through its new pioneer lab concept in Brisbane, which is also the home of its Growth & Innovation (G&I) team.

“On Sunday we sent an open invitation to the best and the brightest in Rio to nominate a colleague to join the lab for 12 months or more to think through some pilots we can run to help move Rio into the 21st Century,” Jacques said.

“We will also look even more to external sparring partners as well, in the very near future.”

In a LinkedIn post, the company said that the lab would see “a small group of talented people tackle some of our biggest challenges and opportunities – from the kind of workplace we want to be, to our role in the circular economy.”