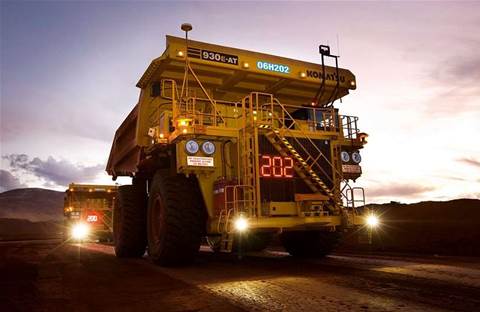 Rio Tinto is set to embark on a “slow” but major expansion of automation across its worldwide haul truck fleet as it looks for ways to release $1.5 billion a year in free cash flow by 2021.

The program of work aims to achieve further gains in mine productivity by improving the “effective utilisation” of assets such as haul trucks, diggers, processing plants and ship loaders and unloaders.

Chief executive Jean-Sebastien Jacques revealed overnight in London that many of the company’s assets worldwide were still under-utilised.

For example, it has 800 haul trucks worldwide with a collective utilisation of between 55 and 75 percent; its fleet of 200 excavators are utilised just 30 to 50 percent of the time.

It also has 50 processing plants worldwide with utilisation ranging from 95 percent to as low as 55 percent, and its 30 ship loaders and unloaders are utilised effectively between 50 and 80 percent of the time.

The miner wants to either get assets moving more ore from pit to port or to retire some of the equipment, in favour of more efficient methods.

Jacques said the decision on which approach to take in a particular part of the business “will be made on an asset-by-asset and committee-by-committee basis".

But the miner last night flagged a significant expansion of the autonomous haulage system (AHS) used to introduce or retrofit trucks in the Pilbara region of Western Australia to run autonomously.

In the first instance, Rio Tinto said it would seek gains by “parking” 40 of the approximately 400 haul trucks in the Pilbara as they were now seen as surplus to requirements.

“They’re heavy haul trucks that were seen as required but are no longer, based on other improvements and other shifts," CFO Chris Lynch said.

"For example, you’ve got [the] Silvergrass [mine] coming [online], which is going to use conveyors rather than trucks.”

The “second wave” of utilisation improvements for the haul truck fleet “will be more about automation,” Jacques said.

“Currently out of the 400 trucks in the Pilbara we’ve got 76 which are autonomous,” he said.

“Over time we will bring the number high[er].

“We [will] do it step by step in a very phased approach because what is important is each time we make an improvement we lock it in and move to the next one. It is slow but it’s about sustainable results.”

Lynch added: “We’ll probably spend more on retrofitting some of the trucks or on new [autonomous] trucks, notwithstanding we’ve got trucks parked up [in the Pilbara].

“We’ll get further down the path on that as we get further into the productivity program.”

Jacques said Rio Tinto’s productivity program came at a time when all major miners around them were “doing the same”.

However, he believed the company’s first-mover advantage with automation, gained through its earlier ‘Mine of the Future’ program, placed it in good stead to continue to outdo its rivals.

“I believe we are slightly ahead of the curve in terms of automation,” he said.

“We’ve got the largest autonomous truck fleet today, we are the only one who has drill rigs fully automated that can do real time sampling and so on, and we are progressing on autonomous trains as well.

“We are ahead of the curve but we are not becoming complacent. We just keep pushing. We will take some time but the prize is very clear.”

The miner said it would discuss more about its productivity and automation plans in a capital markets update towards the end of the year.

Jacques said he currently rated the company’s efficiency at about “7 out of 10”, though he said he was “a tough headmaster, according to the team.”

“I’m sure there are a lot of people in Perth [home of the remote operations centre and corporate functions] who are very upset with me but I still believe there is a lot of room for improvement across the Pilbara,” he said.

“I think with the productivity roadmap and the combination of consistency of practices [across all operations] plus automation and big data, I can see lots of upside - so I think 7 out 10 is a good mark.

“I hope five years down the road we’ll be closer to 9 out of 10, and to be honest if we can get beyond 10 I’d be even happier. But that’s where the people in Perth must be fuming as I’m having this conversation.”