RIM brings email to the PlayBook with OS 2.0 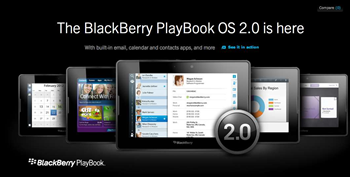 Research in Motion has delivered native email capabilities for the first time to its BlackBerry PlayBook device with the company's long-awaited OS 2.0 software update.

The company had promised to deliver the key feature to the floundering tablet by the end of February.

Introduction of email into the device will eliminate the need for PlayBook users to use a compatible RIM smartphone, connected to the tablet, in order to access their email.

The smartphone-to-tablet connection feature, BlackBerry Bridge, will be recast as a remote control for the tablet, which could be used for presentations and displaying PowerPoint, Word, PDF documents and web pages from a BlackBerry phone on the tablet.

New features in the software update, announced last month, include calendar and contacts integration for the PlayBook. A People View app draws on Twitter, Facebook and LinkedIn data to fill out contact details.

A Facetime-like video calling app is also featured in the new operating system. The app searches for other BlackBerry users connected to the internet, a prerequisite for the service.

The new OS contains an updated predictive dictionary while the BlackBerry App World store will get a boost from Android apps that run on RIM's tablet.

Though most of the new and updated features are available to PlayBook users immediately, one new app - RIM's Video Store - will only launch in the US for the time being.

RIM updated its BlackBerry Mobile Fusion management platform, providing support for any device activated on BlackBerry Enterprise Server 5.0.3 or up. The full release is expected to come next month.