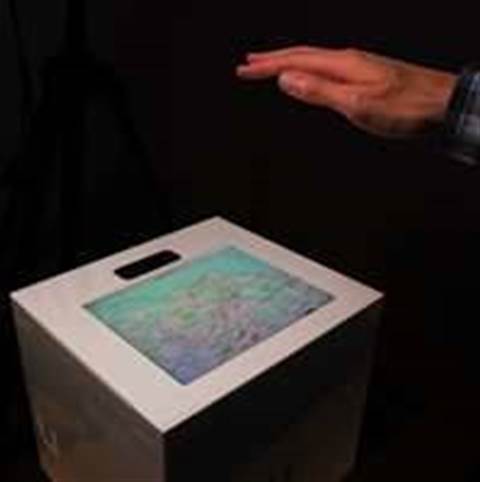 No need to touch.

Researchers from Britain's University of Bristol have demonstrated an "ultrahaptics" or mid-air tactile feedback prototype that allows people to interact with computer interfaces without touching them.

UltraHaptics allows people interacting with a screen to feel what is displayed and also receive invisible information before touching it.

The technology [PDF] works through the use of acoustic radiation force, projected through ultrasonic transducers. These emit very high frequency sound waves which when they meet mid-air, create a sensation on a person's skin.

By combining several waves, the researchers were able to create multiple points of tactile feedback with different properties that can be distinguished by users.

One of the researchers working on the UltraHaptics project, PhD student Tom Carter, said current multi-touch systems with integrated interactive surfaces allow users to use them with their bare hands, but people cannot feel what is on the screen.

The researchers aimed to build in haptic feedback into existing interactive surfaces without sacrificing their ease of use and accessibility.

"To achieve this, we have designed a system with an ultrasound transducer array positioned beneath an acoustically transparent display," Carter said.

"This arrangement allows the projection of focused ultrasound through the interactive surface and directly onto the users' bare hands. By creating multiple simultaneous feedback points, and giving them individual tactile properties, users can receive localised feedback associated to their actions."

The researchers will present the UltraHaptics paper will be presented at the Association for Computing Machinery's Symposium on User Interface Software and Technology 2013 at University of St Andrews this week.