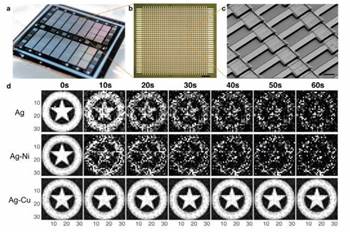 Engineers have managed to create an artificial synaptic network in hardware for the first time, which could pave the way for small and portable brain-inspired circuits that don't require data connections.

Researchers at the Massachusetts Institute fo Technology's mechanical engineering school designed a "brain-on-a-chip" circuit that's smaller than a piece of confetti, made from thousands of artificial synapses.

The synapses are silicon-based memory transistors - memristors - which were first devised in the early 1970s, but which the MIT researchers improved upon by using silver and copper alloys along with the silicon for the fabrication process.

Memristors mimic brain synapses by producing gradient values instead of just binary 0 and 1 like standard transistors, but have been difficult to manufacture so that they perform well.

The signal a memristor produces depends on the strength of the signal it receives, which in turn enables the small components to carry out a much wider range of operations compared to binary transistors.

Memristors can also remember the value produced by specific current strength and produce the exact same signal any time this is received.

Using the improved silicon and metal alloy design, the researchers tested the synaptic chip by equating each pixel of a greyscale image of cartoon character Captain America's shield to a corresponding memristor in the device.

Modulating the conductance of each memristor relative in strength to the colour in the corresponding pixel allowed the neuromorphic chip to produce the same image of the shield, which could be reproduced many times as well.

Past synaptic networks have been software only.

Building on past efforts, the MIT researchers beliveve their small hardware design will enable portable artificial intelligence "brains" for image recognition tasks, without having to connect to supercomputers, the internet or compute clouds.