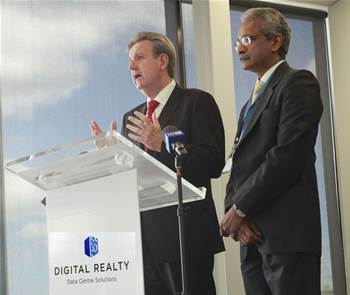 Photos: Inside the facility that houses Rackspace's cloud.

Digital Realty Trust has thrown open the doors to its $250 million Erskine Park data centre in Sydney's west, providing the first look inside a facility anchored by cloud provider Rackspace.

Rackspace occupies one of four data halls and has been offering live services from the facility since December last year, A/NZ country manager Mark Randall said.

"We've been very happy with the facility so far," he said.

"We've had the fit-out completed and we've got our full 24/7/365 data centre operations team hired, who've been working on the full shift schedule for both maintenance and server builds.

"﻿We had some of our existing customers migrate [to local servers] during the testing or beta phase in December last year, and since then we've had further customers come online."

Randall said there was currently a 50/50 split between new and existing customers in occupied racks in the Sydney data centre. No customers were identified.

He said that "all significant components" of Rackspace's cloud offerings would be progressively rolled into the facility this year.

"We've identified what the priority products are that this market is looking for and we have a phased rollout plan that we will be announcing throughout the year," Randall said.

Rackspace has a 10-year lease on the data hall, signed in August of last year. It is no stranger to Digital Realty-run facilities, also using them in the United States and United Kingdom.

Digital Realty snapped up the 3.48-hectare plot of land at Erskine Park in mid-2011 for $10.7 million. The facility is a key part of the data centre operator's Australian growth strategy.

He estimated around 250 jobs were created by the investment.

The company also recently fitted out a Melbourne-based data centre for National Australia Bank. An adjoining data centre is planned for that site in August or September this year.