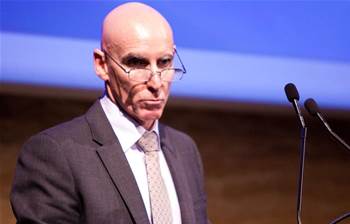 It is much easier to deliver nationwide e-Health and remote education services on a standardised and ubiquitous network. On the contrary, it's rather difficult to deliver these services on a patchwork of technologies - it's been tried in other countries.

The NBN will be a wholesale only network which will provide the underlying broadband capability to all players on equivalent terms. NBN Co is working closely with the ACCC to ensure that the Company is subject to strict regulatory oversight for the long term.

As most players in the telecoms industry in Australia know, we have a fundamental industry structure problem that is finally being addressed with the NBN. This is a major breakthrough.

In reaching the seven percent of Australia's premises that are not within the fibre footprint, NBN Co will be providing a 12 Mbps service on wireless and satellite that is as close to the fibre product as technology allows. It will be provided at the same wholesale price, no matter where the premise is located.

We are mindful that the costs are significant in serving these more remote customers, and that no commercial company would find this an attractive market. But we take very seriously the objective given to us by the Government, to serve all Australians.

We will also be providing connectivity for Retail Service Providers to access an end user in a given region from the same Point of Interconnect, using the same processes, from the same physical network interface and, as I have said, at the same wholesale price.

NBN Co is planning for the provision of Uniform National Pricing. That is pricing which is distance and technology independent. We are currently working with Government on the practical application of Uniform National Pricing which is critical for lowering the barriers to entry for Retail Service Providers and delivering effective national retail competition.

This, in turn will drive increased levels of retail competition in rural and regional Australia, lowering the cost of doing business for those living and working in those areas.

I recently met with the representatives of the National Farmers' Federation (NFF) and the NSW Farmers' Association. Who as you can see from the screen, clearly supported our direction. We are doing everything we can to allow the people living and working in the 7 percent of premises not covered in the fibre footprint to be provided with the best possible telecom services.

Of course this doesn't come free. It means that the NBN Co business case does not produce the commercial returns that a private investor would demand.

That is why it is the Government that is funding this infrastructure build.

It never ceases to amaze me that people who should know better, criticise the NBN because it is not going to generate the sort of returns that private investors would be seeking.

I wonder if Charles Todd's Overland Telegraph suffered the same criticisms. If you recall it cost £480,000. But it was decades before the Overland Telegraph generated a positive return on investment. Annual revenues from telegraph traffic during the first decade of operation were only £12,000.

This slide demonstrates the relative cost to the public purse across the three major publicly funded fixed wire infrastructure rollouts. You can see that NBN is very comparable. 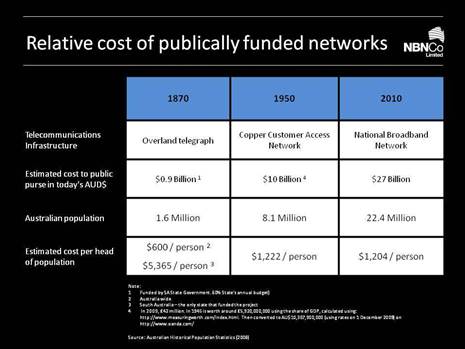 Warwick Smith who delivered this oration 15 years ago said these words about Overland Telegraph: "...not enough to pay interest, maintenance and all construction costs - but the incalculable value to the nation as a whole from the undertaking, warranted the understanding of a community who saw the long term value of the broader benefits and were not blinded by a necessity of immediate return."

We, in NBN Co, are also not blinded by the necessity of immediate returns on the public investment in the NBN. But we will be providing a long term return and will be covering our costs relatively quickly.

Without factoring in any social, economic or productivity benefits that the NBN will provide, the returns predicted by our business case will be very acceptable to the Government.

Our business case requires equity funding by the Government of around $27 billion. This is not the total capital costs, as we expect to raise debt, without Government guarantees, of at least $10 billion.

The Telco and Finance professionals within NBN Co that have built this business case are experienced business people who have been involved in running some very large companies and know how to assess risk.

It is also the case that the Heads of Agreement with Telstra both reduces the total costs of the build and provides a level of assurance to the revenue line.