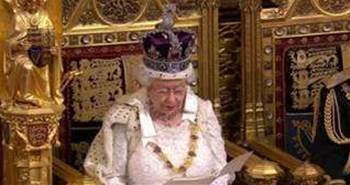 Otherwise known as the ‘Snooper's Charter', the bill is expected to force UK-based ISPs to keep huge amounts of data on customers and make the information available to government and security agencies when  requested.

The speech was met with fierce criticism, with many taking aim at the government's continued attempts to make the draft data communications bill official law.

“Changing the name of the proposal to snoop on our mails and phone calls doesn't change the fact it will undermine civil liberties," former Green Party leader Caroline Green tweeted.

“We have yet to see real evidence that there is a gap in the capability of law enforcement or the agencies' ability to gain access to our communications data," CEO of Big Brother Watch Renate Samson said.

“We are also yet to see any concrete evidence that access to communications data has and indeed will, make the country safer.  The only evidence we have is of numerous failures to make effective use of the data already available.

“Any new draft legislation must acknowledge that the bigger the haystacks the harder it will be to find the needles.“

Aral Balkan, founder and developer of social start-up ind.ie – which may move out of the UK over surveillance fears – said he wasn't surprised by the speech.

“The speech could not have been more Orwellian if it had actually been written by Orwell as a monologue for Big Brother himself," Balkan said.

"It portends the kind of surveillance state the UK will become in the next five years unless this government is challenged at every turn by those of us who value human rights and democracy. Even then, it may just be too little, too late.”

He said while “many will stay and fight, some of us will have no option but to leave".

“Cameron has asked for backdoors on messaging apps and as someone working on building a social network that respects your privacy and human rights, I see no way to stay in the UK and guarantee that we will not be forced to compromise the integrity of our platform.”

The proposed laws mirror legislation recently introduced in Australia, which similarly requires telecommunications companies to store the non-content data of their customers for two years to aid law enforcement.

The Australian legislation similarly received fierce criticism from the telco industry and privacy and internet groups over its proportionality to the threat.

Got a news tip for our journalists? Share it with us anonymously here.
Copyright © SC Magazine, UK edition
Tags:
britaincyberinfosecqueens speechsecintsecuritysnoopers charterstrategyuk