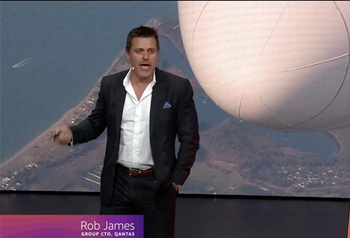 Qantas has set a target to migrate workloads currently run on mainframe and midrange systems into the cloud by 2021.

Group chief technology officer Rob James told the AWS Innovation Day in Sydney that despite the existence of a large number of futuristic opportunities for the airline driven by technology, it still had some foundational IT work to complete.

“As a 99 year old company, sometimes I think some of our systems are that old as well.

“One of the big projects we have at the moment [is that] we're trying to move pretty much most of that workload into the cloud.

“We have a roadmap to get our compute workloads, which includes mainframes and mid-range systems, into the cloud by the end of 2021.”

James said that the “pretty bold” migration goal was being worked on with assistance from Amazon Web Services as well as “ProServe”, an abbreviation sometimes given to AWS Professional Services.

Still, James said that more future-focused projects, particularly those underpinned by cloud, were still being pursued in tandem.

The airline also expected that future aircraft would offer an exponential increase in the amount of telemetry data that could be collected and fed into sophisticated platforms and algorithms for analysis.

Where the current generation of 787s produced half a terabyte of data after each flight - a number Qantas has previously disclosed - James said that “is dwarfed in comparison to what we expect in the future.”

“The next generation of aircraft are going to give us a petabyte of data every time they fly, [and that’s] from the engines alone,” he said.

“That's a 2000 times increase on what we're doing today. So the growth is amazing.”

Understanding that amount of data would reinforce the importance of cloud in Qantas’ architecture and future plans, he indicated.

The airline said at the end of last year it is using cloud compute and big data to calculate the best flight plans for its aircraft.

James also said that Qantas had created a system to simulate "different aircraft models, configurations and engines", among other future scenarios.

"What's really interesting about that is every time we run one of these simulations, we're basically doing a 10 year study in about nine hours," James said.

"How do we do it? Again we do it in the cloud. We basically spin up approximately 4000 CPUs, run the analysis, and then spin it right down to nothing.

"It's obviously something we would not not have previously done in a traditional data centre."