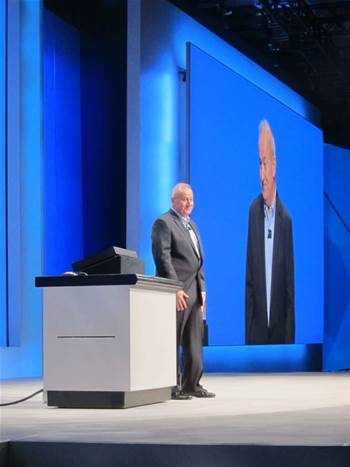 The private cloud is today more secure than the security in a physical IT environment, Art Coviello, executive vice president of RSA, told journalists at a press conference during the RSA Conference in San Francisco overnight.

When asked which environment was more secure Coviello confidently said: “The private cloud we can clearly make more secure than a physical environment today. With a hybrid or public cloud we have to be one step more careful,” he said.

"If you are virtualising your environments and embedding the controls in the virtual envrionement then you worry less about the provision in different environments. And as for security management, we can have better visibility in the cloud," he said.

“Security is number one in people’s minds [when it comes to the cloud] because they don’t understand how to take advantage of virtualisation – it’s the fear of the unknown," he said.

Earlier, Coviello announced the Trust Cloud Authority, a security service that gives a stamp of approval to cloud service providers. RSA claimed that applications approved by the authority would be secure.

Coviello touched on the degree to which the CIO demand for virtualised environments has ramped up since RSA 2010.

“The business people are demanding it," he said. "Security fears might still be there but they are going ahead anyway. If they can’t get satisfaction like they can downloading an app they’ll find a way,” he said.

In an exclusive interview with CRN last year, Coviello said the cloud was at least 10 years away from full-scale adoption. Despite the increase in demand Coviello stuck to the same timeframe.

“It will be at least 10 years before fairly universal adoption of cloud, before we see massive infrastructure outsourcing to cloud. At the end of the day you will get things by the drip."

Executive vice president Art Coviello maintained his leadership of RSA despite having stepped away from the day-to-day operations of the business, he told journalists at news conference in at the RSA Conference in San Francisco.

Coviello said he promoted Tom Heiser  to chief operating officer of RSA last year as part of a succession plan which saw him take over the presidency  from Coviello this week.

"I continue to be active. This frees me up to think strategically, think about mergers and acquisition opportunities and meet customers." He described his new full time role of executive of Trust Cloud as “the best job in my life”, he said.

Got a news tip for our journalists? Share it with us anonymously here.
Copyright © CRN Australia. All rights reserved.
Tags:
cloudcloud publichybridprivate cloudrsa11security