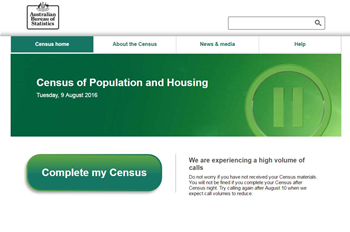 Australia's Privacy Commissioner is "generally satisifed" with the security provisions guarding the extra personal information being collected in this years' national Census, despite widespread public concerns.

But he said the Australian Bureau of Statistics could have done a better job of communicating with the public about what it plans to do with the data to avoid the furore now surrounding the August 9 survey.

The ABS has been battling a public backlash against its decision to collect and use citizens' names and addresses this year in order to link Census data with other government datasets. The information will be destroyed after four years, but anonymised versions of the details, created to enable the linkage, will be kept indefinitely.

This year will also be the first in which citizens can fill out the Census online en masse. But the ABS was forced to defend the security of its Census website last week after after it was revealed to be supporting a deprecated form of encryption widely recognised to be insecure.

Many have pledged to either boycott or enter incorrect information into the Census, citing privacy and security concerns. A handful of members of parliament have joined the campaign, saying they would refuse to provide their names and addresses - which could attract fines of as much as $1800.

But the country's Privacy Commissioner Timothy Pilgrim today said his office had worked closely with the ABS and was confident it had put in place the "highest standard of security possible" to protect the sensitive data.

"It would seem that the ABS does have appropriate levels of security to secure the information as it's being collected, and appropriate protections in place to ensure that it is secured once they have hold of it," he told Radio National.

The ABS contracted IBM in late 2014 to develop the web-based Census and host it out of its data centre in the Sydney suburb of Baulkham Hills.

Pilgrim also said that while he did not see any privacy issues with the ABS' data-matching plans, the agency could have avoided the public backlash by being more transparent about what it intends to do with the sensitive personal information.

"I think there might have been some better work done to explain to the community about why there is a need to keep the information for four years rather than the 18 months it has been kept previously," Pilgrim said.

"I think what we're seeing with the debate around the Census is just how much importance the Australian community places on their personal information and what is going to happen to it.

"It stresses the need for transparency by all government agencies about why they're doing this, and explaining it carefully to the public. But we do need to remember that the information the government collects as part of the Census is really important and is used for some really good social benefits."

The official Census night is August 9, but Australians have until September 23 to complete the form.

The ABS extended the deadline to lessen some of the load on its website and in response to an influx of calls about citizens not yet receiving their unique log-on code in the mail.

Despite this, many of those trying to lodge their answers on Tuesday reported being unable to access the site due to an internal server error.

Census program manager Duncan Young told iTnews in July the ABS had provisioned "more capacity than we need" to handle the influx of online responses.

"And most people will finish the Census form in under half an hour. So you're churning though a lot of people in a short period of time.

"The scale is enormous. The last thing we want is people not to have a really great experience when they choose to fill out the Census online."

But Twitter was flooded with reports on Tuesday of people being unable to access the census.abs.gov.au site. The agency has been contacted for comment on the technical problems.

The ABS is expecting 65 percent of people to fill out the form online this Census.