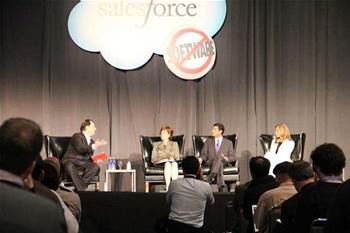 A panel of policy makers and advisors has blamed legacy software vendors and integrators for “disinformation” that has kept governments from adopting cloud technology.

Former US Government chief information officer Vivek Kundra told cloud vendor Salesforce.com’s Dreamforce conference of “cartels” of contractors that aimed to “put in as many people as possible and charge exorbitant rates”.

He planned to spend a quarter of the US Government’s $80 billion IT budget on cloud services that would enable it to cut energy costs by $5 billion by 2015.

“Part of what’s about to happen in the coming months and years is [that] there is going to be intense downward pressure in terms of budgets that are going to be cut,” Kundra said.

Last year, Burton told iTnews that he planned to visit Canberra to engage with the Australian Government and regulators about cloud computing.

He did not make that trip due to a role change within Salesforce.com, but said company executives had consulted with officials from the US, Japan, European Commission, New Zealand and Australia in previous years.

A spokesman for the Office of the Australian Information Commissioner confirmed that representatives of the office met with Salesforce.com's Global Privacy Counsel this March.

The high-level discussion covered privacy issues, including the privacy law reform process, but no advice on specific issues was sought or offered.

Burton said that governments were traditionally very risk-averse organisations whose traditional contractors were reluctant to move to the cloud.

“There are a lot of legacy IT companies who do not like that shift to the cloud because it disrupts their business models,” he said.

Burton said cloud vendors were like any other outsourcer that needed to provide secure, cost-effective and high-performing services.

His comment echoed views expressed by panelist Neelie Kroes, the European Commissioner for the Digital Agenda, who said cloud vendors needed to provide trusted, consistent services to be successful.

“Trust is based on consistency,” Kroes said. “We should also be aware [of] who is delivering the technical instrument.

“Not everyone who is involved in this game has the same level [of security and trust].”

Burton said it was up governments to establish international policies that would address regulatory concerns with storing data in cross-jurisdictional data centres.

He was optimistic about the cloud computing market, describing the US Cloud First Policy as a “precursor to what might happen elsewhere in the world”.

“Telephone data goes all over the world; it’s not geographically bounded,” he noted, but “governments are not quite clear in how all this [cloud data jurisdiction] works.

“I can’t predict what the governments are going to do but I think those discussions are starting.”

Kroes was part of a European Commission effort to develop a Digital Agenda to leverage “fast and ultra fast internet and interoperable applications”.

In May, the European Commission invited the public to share their views on cloud computing.

The online public consultation closed this week; Kroes expected to issue a European cloud computing strategy next year, with Harvard’s Kundra as an advisor.

Data jurisdiction, Kroes said, was “by definition, a global issue”.

“There will still be not a solution that is globally clear in the short term,” she warned, noting that Europe needed to combine its policy development efforts with those of the US and Asia.

Liz Tay travelled to Dreamforce and VMworld as a guest of Salesforce.com and VMware.