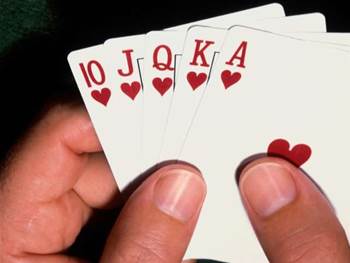 The co-founder of the Absolute Poker website has been accused of cheating after players twigged to a series of illogical bets..

Players became concerned when in tournament games a player called Pottripper was winning money very quickly and folding on some hands that normal players would have carried on with.

After one of the players requested a full record of the tournament someone at Absolute Poker sent over a file, which not only had the player's history but that of everyone else in the game.

A group of players went to work on the file and found Pottripper's IP address was registered to Scott Tom in Costa Rica, co-founder of Absolute Poker. Furthermore it became clear that a user had full sight of everyone's cards.

"If all this is correct, it shows exactly how the cheating would have transpired: an insider at the website had real-time access to all the hole [hidden] cards (it is not hard to believe that this capability would exist) and was relaying this information to an outside accomplice," wrote economist Steven Levitt, in his blog.

"If this is all true, I presume that the two cheaters are looking at potential prison time. I would also guess that if Absolute Poker continues to argue that nothing out of the ordinary happened, they will take an enormous hit to their profits."

After analysis by players began the Pottripper operator began to start losing money, a tactic that Levitt assumes was carried out to allay suspicions. But it had the opposite effect, with the sight of a player betting on hands that could not win looking as suspicious as winning too quickly.

"Absolute Poker takes all allegations of player fraud and collusion extremely seriously," said the company in a statement, according to the players.

"Fair play and security are of paramount importance to us. Our Security and Fraud Department is dedicated to ensuring that everyone on the site has a fair opportunity to win, and that no improper methods, devices, programs and/or other unfair advantages are ever utilised in our games."
Got a news tip for our journalists? Share it with us anonymously here.
Copyright ©v3.co.uk
Tags:
accusedbosscheatingofpokersoftware