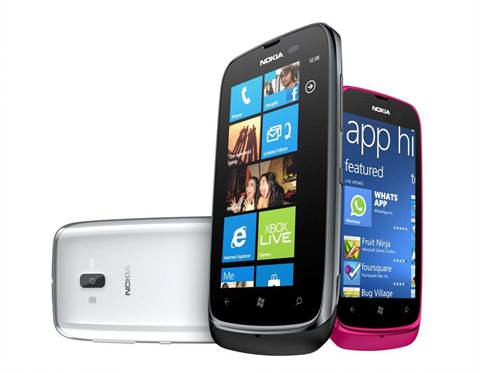 The Finnish company last year dumped its own smartphone software in favour of Windows Phone to step up its fight against rivals such as Apple's iPhone, but the high prices of its phones have been a major weak point.

Nokia said its new Lumia 610 model would carry a price tag of 189 euros ($A235), excluding subsidies and taxes, when it goes on sale next quarter.

That compares with around $US600 ($A557) for the iPhone and other high-end smartphones.

Investors, however, were unconvinced the new models and pricing of Lumia 610 would do the trick, and Nokia shares were down 6.6 percent to 4.04 euros by 1457 GMT.

Analysts noted that Asian handset makers such as Huawei and ZTE were coming out with even cheaper smartphones for closer to $US100 ($A93).

"I had hoped for a slightly lower price range. Maybe the markets were a bit disappointed with the price, which was quite high," Inderes analyst Mikael Rautanen said, adding the shares had spiked on Friday in anticipation of the event.

The move comes over a year after Chief Executive Stephen Elop compared Nokia to a "man standing on a burning oil platform" and teamed up with Microsoft to take on Apple and Google's Android phones.

Wall Street and industry analysts say that although the latest Windows phones could be worthy competitors to Apple's iPhone and top-of-the-range Android handsets, the devices lack unique qualities to help sales take off.

One way Nokia is trying to differentiate itself is with its cameras.

On Monday, it unveiled a new top-of-the range cameraphone, the Nokia 808 PureView, packing a 41 megapixel sensor, significantly more than those in advanced cameras used by professional photographers.

Analysts said the 808 model will still struggle as it uses Nokia's old Symbian operating system, although Nokia plans to adopt the camera technology for Windows Phones in the future.

"This innovation by Nokia and Carl Zeiss should worry compact camera makers like Canon and Nikon who are already under assault from the rise of the camera phone," CCS's Wood said.

Microsoft's share of the smartphone market fell to just 2 percent last quarter, from 3 percent a year ago and 13 percent four years earlier, according to Strategy Analytics.

Microsoft has the full backing of Nokia, but is struggling to get equal support from other handset makers, such as Samsung, which are clearly focused on their Android offerings.

In addition to its struggle in high-end smartphones, Nokia also faces an increasing threat from Asian manufacturers.

Analysts say both Huawei and ZTE are set to grab more market share globally in 2012, as they shift their focus from basic phones to smartphones.

Huawei and ZTE are now selling smartphones running on Google's Android operating system, attracted to the higher margins the market provides. Both firms made new handset announcements at the same trade show, the Mobile World Congress in Barcelona.

(Additional reporting by Terhi Kinnunen in Helsinki and Bill Rigby in Seattle; Editing by David Cowell)