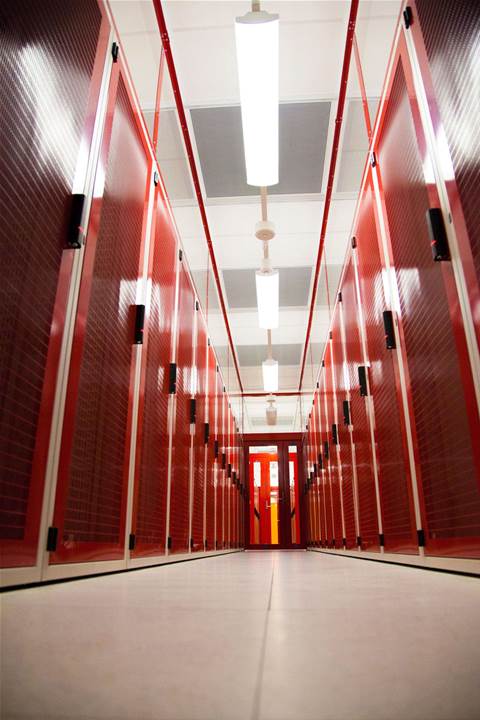 NextDC is set to install customer equipment for the first time at its flagship Australian data centre in Melbourne next week as it puts finishing touches to the 17,500 square metre building.

The company officially launched the $130 million in South Melbourne yesterday, with plans to offer a total 6000 square metres of technical co-location space spread equally over six data halls once complete.

Harbour MSP has also anchored the facility, leasing an entire 1000-square-metre hall, from which it plans to launch its Melbourne network operations centre and sub-let space.

The remaining three of six halls are expected to begin construction early next year.

They would likely be fitted out with a $40 million fund NextDC expects to gain from selling and leasing back the facility. Recently appointed chief executive Craig Scroggie said the company was still in the process of finding a buyer for the building.

The facility has been built to Tier III uptime and ASIO T4 security certifications, both of which Slattery said the company was seeking to complete within the coming months.

"When I first started thinking about setting up NextDC, I knew that Melbourne was going to be very important to the company, mainly because I could see a distinct lack of data centre space, and particularly enterprise-class, large-scale, energy efficient data centre space," Slattery said.

It is the second such facility for the two-year-old company, which launched its 3000-square metre Brisbane facility in October last year.

The company has also leased space in Canberra aimed at selling to Federal Government, and has embarked on plans to launch at least two greenfield data centres in Sydney, and one in Perth, from next year.

The Melbourne facility comes 15 months after the company, and construction partner FDC, first broke ground at the South Melbourne site, a feat Slattery prided himself and his company on achieving.

"Did we break ground? We punched it for about four months," he said, noting the building was supported by 430 piles at an average depth of 35 metres.

"Bedrock was a long way down. We found some things left over from World War II — we found a half-filled fuel tank with aviation gas from the 1940s. That was exciting; they're the gems you want to find when you're building data centres."

Slattery said the company would look to court business from high-performance computing clients such as render farms and research institutes in future, taking advantage of the facility's specific capability to divert cooling from the building's main pipes to a separate data hall for high-powered racks of up to 50 kW each.

"We're not building this data centre for today, we're building it for tomorrow," he said.

"Some of those guys use direct cooling in the process, so we've built it so we can do a bit of bundling in the floor. I think we're probably one of the only data centres in Melbourne that could do it."

The facility would handle a total 2kW of power per metre, 12 megawatts of IT load for the entire building and have the capacity to draw up to 20 megawatts from the grid at peak.

Despite the high-power capabilities, Slattery claimed the facility would reach an average power usage effectiveness rating of 1.35, lowered partially by a $1.2 million, 400 kW solar array being installed on the roof and two, 2MW tri-generation power plants the facility would receive over the next year.

"We could have dropped it on the deck but ... it cost about the same," he said.

"In a co-location environment, there's probably another three to five years [in raised floor environments]. It's very much like rack technology, it was probably only five years ago that everybody bought rack-mountable equipment, I think it will be the same with raised floor.

"Within two years time we'd probably be removing the raised floor [in new data centre designs] but we have to wait for vendors to catch up to that."

The launch of the Melbourne facility coincided with the inception of Slattery's pet project; a mobile application that would allow customers in NextDC facilities to remotely monitor and configure access to their racks, determine power use and carbon footprint per rack.

It would also allow remote locking and unlocking of individual racks.

iOS and web-based versions of the OneDC app were made available this week, with an Android equivalent expected for completion in the next two months.

Slattery recently stepped down as CEO of the data centre operator, citing a desire to focus more heavily on the remote access product.

"Customers need to be empowered to manage their IT infrastructure with the same level of control as if they had their own data centre, while having the vastly more sophisticated services and availability of scalability," he said.

Leighton Holdings subsidiary Nextgen Networks is planning to offer a similar feature to customers in its data centres.