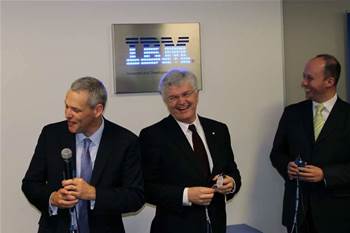 IBM has opened a research and development laboratory in its Melbourne – the computing giant’s first to incorporate blue-sky research in Australia.

The laboratory had $22 million in Federal Government funding and an undisclosed amount from the Victorian Government.

Federal Innovation Minister Kim Carr said IBM agreed to invest “many many times” what the public had contributed in order to receive funding.

Plans to establish the laboratory were announced last year. Staff began assembling in IBM’s Melbourne office in February and the 15-person team moved into the new centre in August.

The team comprises IBM employees who relocated from the US and China, local researchers and an Australian expatriate who contacted IBM when upon learning of the opportunity to return home.

IBM plans to hire a total of 150 researchers for the laboratory within five years.

The new laboratory is its first in the country to be run by IBM’s research arm, IBM Research, with scientific research priorities.

It is also the first among IBM's 17 global research laboratories to have development responsibilities – a model the company hopes will enable a shorter time to market.

“We decided that we were going to run an experiment of doing both research and development together and co-locate it with a university – something we’ve never done before,” global research director John E Kelly III said.

“What we’re attempting to do with this model is do much more rapid transfer of technology and innovation from the research mode to products that we can rapidly deploy around the world.”

The laboratory on Lygon Street, Melbourne, will work closely with the University of Melbourne and focus on building technology for resource management, disaster management and healthcare and life sciences.

Carr said the Government initiated the project in a bid to attract talent and jobs to the country and encourage other companies to engage in similar public-private ventures.

“It’s the ideal type of project we want to see more of,” he said, with the government hoping to “turn good research into products”.

“We are currently producing in excess of three percent of the world’s scientific papers. Our task is to translate that into jobs and economic opportunities.”

An emotional Wightwick said the laboratory’s establishment was a “labour of love”, as his career was inspired in a New York IBM laboratory in 1990, when he was a 22-year-old engineer and assigned to work with Australian physicist Greg Clark.

“I was truly inspired and made two promises to myself … first, I decided that my career was going to be deeply technical and I wanted to work, somehow in IBM’s R&D organisation.

“My second commitment was really a question: why didn’t we have an IBM research or development capability in Australia?

“I truly hope that when my son and two daughters are 22 years old, they can find the same inspiration here in Melbourne that I found in New York 21 years ago.”

IBM managing director Andrew Stevens said the launch was “big news” for Australia’s research communities as well as for the vendor’s public and private sector clients.

“The capabilities we’ve assembled here are the deep analytical, research and innovation skills that organisations need to solve the most intractable problems,” he said.

“We’re asking [clients] to bring us their most impossible challenges, the challenges they believe cannot be solved, and we’ll focus some of the world’s best scientific and business minds [and] the fastest supercomputers in the world on finding the answers.”