Photos: How to build a datacentre in 80 days 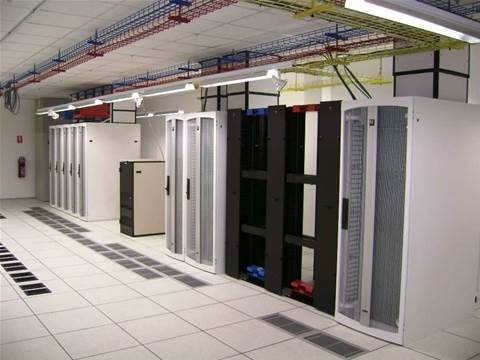 The construction of the AMC data centre - shown in graphical detail in the gallery (top right) - saw HPC turn a concrete shell into an operational server room in just 80 days.

With a few redundancy features yet to be installed, the owner-operator has offered rack space at half price until September.

The AMC data centre features a raised floor and fake ceiling and offers to house customers' servers and networking equipment in Chatsworth cabinets.

HPC managing director Justin Thomas told iTnews that the young company could afford to chance new ideas from equipment vendors such as Chatsworth.

The cabinets are designed with a perforated front door, a solid back door and a chimney-like exhaust at the top, so that hot air from the rear of racks is separated from the cooler air at the front.

The hot air rises and is funnelled through the chimney into a plenum above the fake ceiling. From there, the hot air is pushed back into the cooling units and then, recirculated.

It's not hot aisle containment, since hot air never gets the chance to mix with the cold air, Thomas said.

"If I don't want to work in a thirty degree hot aisle, I wouldn't expect my staff too either," he said.

The facility is connected to fibre provided by both Telstra and Optus, plus a fibre link to a HPC point of presence within the Perth iX data centre, which interconnects with several national and international internet service providers and carriers.

In September, HPC also plans to introduce a microwave link, connecting the AMC data centre to facilities in the Perth CBD, as an additional layer of redundancy.

Redundancy features on the way

Thomas told iTnews that rack space will be sold at half price at AMC until September to reflect "the lack of redundancy at this point."

A diesel generator is on order, and arrives in early September, as does the extra microwave link.

HPC is also planning to build a plant room adjacent to the facility.

At present, the data centre's UPS systems are located inside the server room and the main distribution board is sitting on the server room floor. But as more rack space is sold, HPC will finish off the plant room and move the plant equipment away from the racks.

Thomas said there would be no downtime during this transition.

"We are anticipating none," he said. "We have spent hours planning change management."

One key element to this modular approach is the use of Starline bus bars, manufactured by Universal Electric - which Thomas said was the same power distribution system used by Facebook, eBay and Sun Microsystems.

This system allows the data centre administrators to add or change power requirements "almost on the fly" without dropping power to a rack.

"The whole data centre is modular in design, you can plug and play and add and change infrastructure easily," Thomas said. "The facility is over-engineered for today, but ready for tomorrow."

Thomas expects the AMC's first customers to be those with one or two racks hosted elsewhere and wish to consolidate in a more modern, higher density facility.

He also expects demand from West Australian companies currently hosting with facilities on the East Coast.

HPC eventually hopes to attract customers seeking 10-50 racks at a time, such that the company can start taking orders to build larger data centres.

The Australian Marine Complex is a large industrial with an adjoining technology precinct, which in itself could attract a number of customers for the data centre.

Thomas expects the AMC data centre to be the first of many data centres the company will construct.