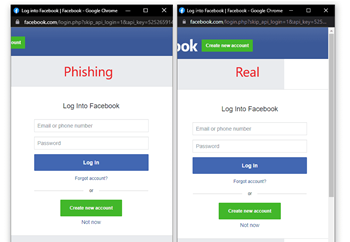 Phishers have come up with a new technique to trick users by simulating browser windows with the browser itself in order to spoof legitimate domains, which is hard for victims to detect.

A security researcher using the moniker mr.d0x has documented how phishers create bogus pop-up windows for Google, Microsoft and Apple websites which look almost exactly the same as the legitimate ones for authenticating users.

It is difficult for users to work out that they're on fake sites, mr.d0x wrote.

"... once landed on the attacker-owned website, the user will be at ease as they type their credentials away on what appears to be the legitimate website (because the trustworthy URL says so)," mr.d0x wrote.

Oh, this is good.
Think you're typing into a pop-up window? Make sure that you try to drag it OUTSIDE OF the content area of the page first.
Surely normal human beings do this. https://t.co/MLJzvUFkLW pic.twitter.com/zB1QbjpgKq

Spiderlabs tested a phishing message with links that pointed to common email providers such as Google Gmail and Microsoft's Outlook.com, and found that the landing page elements changed accordingly.

The security researchers noticed that at least four elements were changed to match the phishing links, using Javascript.

These include the page background, a blurred logo, the title tab and the capltalised text of the domain, from the email provider, which all changed to trick victims into thinking they were on an authentic site.