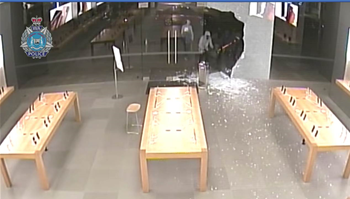 Thieves have made off with over $300,000 of Apple products after smashing the glass fronts of two Apple stores in Perth to gain entry.

WA Police said in a Facebook statement that the stolen items were “mostly mobile phones”.

“The manufacturer knows what phones have been stolen and security measures will be enabled meaning these telephones are useless,” Whelan said in a video message.

“We want the public to not spend their hard-earned money on items that don’t work.”

Police did not disclose the company that was hit, however surveillance video footage clearly shows an Apple store and this was confirmed by ABC News and other TV outlets overnight.

“Around 2:15am, a group of people forced entry to a store in Hay Street causing damage, they were disturbed and left the scene,” WA Police said.

“Around 2:55 am a group forced entry into a shopping centre complex along Riseley Street, Booragoon and smashed the front glass of a technology store.

“The group were armed with weapons and threatened security staff before stealing items.”

Police said they were after dashcam or CCTV footage from around the two incident locations.

In particular, they were seeking a taxi driver and cyclist whose presence around the Perth CBD incident may have contributed to the thieves leaving that store empty-handed.