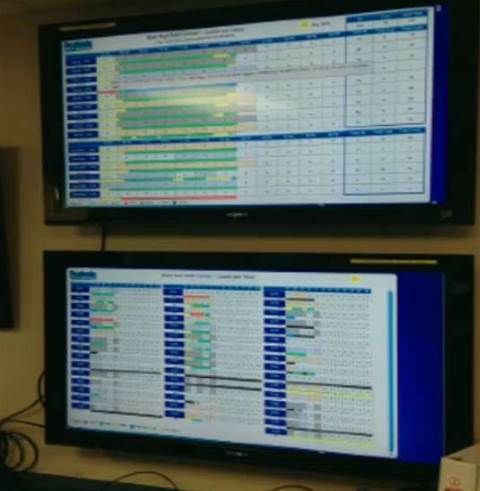 Peabody Energy is using business intelligence to expose workers' late starts and long lunches in a bid to squeeze more production capacity from its coal mines.

The company, which has 11 coal mines in NSW and Queensland, is running the business intelligence platform initially at its Bear Run Mine in the United States, though the technology could be applied elsewhere in future.

Director of business intelligence, Keith Bowles, told SAP's SapphireNow event the miner is crunching two-minute increments of data from its fleet of excavators, bulldozers, shovels and draglines to generate "real time visibility into the health and status of those pieces of equipment".

The data is surfaced via widgets to a screen in the mine's central control room and via mobile apps to the mine's shift supervisor.

"The challenge that we were given by our operations ... was, 'Give us the right information to the right people to increase production at our mines'," Bowles said.

The 'First Bucket Report' tracks when the bucket of a shovel, excavator or dozer hits the ground at the beginning of each shift.

"We generated a single report to the shift supervisor showing him that 90 percent of the time that bucket hits the ground at 7.30, at 7.45," he said in a separate session at the conference.

Bowles said the shift supervisor could look at the exact time a bucket hit the ground "by piece of equipment, by driver".

Visualising the delay in equipment start-up increased Peabody's yield by 20 loads per shift.

The second report is simply called the 'Lunch Report'. As the name suggests, it times the lunch breaks taken by shift workers.

"Their lunches should only be 30 minutes, but their lunches are going 37 [minutes]," Bowles said.

While the reports are popular with the shift supervisor and control room, they are apparently less so among workers.

"These two reports now don't allow me to visit the mine site because those ops guys are going to kill me because now their shift supervisors are looking at them and seeing that they took an extra nine minutes on their lunch," Bowles said.

"But the key takeaway is that it's basic simple information to run the business."

Bowles also appeared at the SAP conference on a panel speaking about mobility, which he described as a key focus for Peabody this year and beyond.

He said the company dabbled with mobility — using SAP's BusinessObjects Mobile app — in 2011/12.

"We decided in 2013 we needed to really focus on an end-to-end mobile strategy," Bowles said.

"What we did in the beginning of 2013 is we started looking at how do we want to mobilise and why should we mobilise.

"The how's the easy part, the why is the important part."

Bowles said Peabody would look to leverage existing apps created by SAP and others rather than try to develop custom apps to mobilise data.

He also said that the ability to scale the technology across its entire business would be a key consideration as Peabody developed its mobility strategy.

"We always look — when we start these projects — at how we can take this one localised issue and spread it across the organisation," he said.